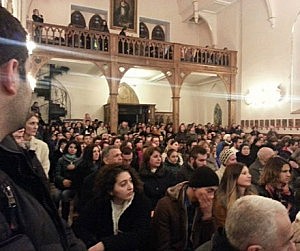 Christmas Mass in the Catholic Church in Tbilisi. (DF Watch.)

TBILISI, DFWatch–Eight religious organizations in Georgia have filed a lawsuit with the Constitutional Court, demanding to get rid of legislation that provide beneficial tax terms for the Orthodox Church.

Georgia’s Tax Code, as well as an agreement between Georgian government and Orthodox Church, free the church of having to pay many taxes.

In their lawsuit against the government, the claimants underline that this is a violation of the Constitution, which guarantees the principle of equality before the law. The 14th passage of the Constitution says that every person is free and equal before the law, regardless of race, skin color, language, sex, religion, political or other views, national, ethnic or social belonging, origin, property or social status or place of residence.

The religious organizations want to remove regulations and norms which oblige them to pay additional income tax and property tax, while the Orthodox Church is exempted.

For year, religious minorities in Georgia have been asking to abolish state discrimination and have a tax system based on equality for all beliefs, but the problem remains unchanged.

Religious organizations had also protested against the Orthodox Church receiving large amounts of financing from the state budget every year, which is not an obligation for government.

Last year, the government decided to allocate additional financing for the Roman Catholic Church, the Armenian Apostolic Church, as well as Muslim and Jewish communities, but the amount was only 4.5 million laris, while the Orthodox Church receives more than 20 million every year.