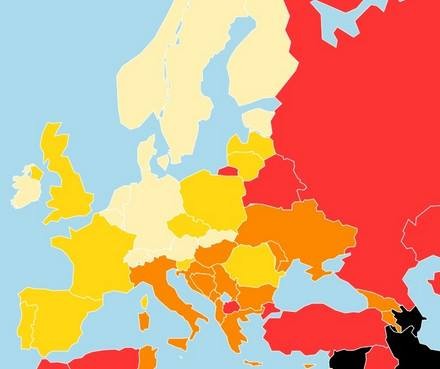 TBILISI, DFWatch–Despite the relative rise in the ranking to the 64th place, the highest place in the region, Georgia’s score slightly declined.

However, given the overall ‘deep and disturbing’ decline in media freedom across the world, Georgia experienced a relative jump of five places in the ranking from the 69th place in 2015 to 64th today.

RSF called Georgia ‘the final frontier’ of media independence in the region.

“The reforms of recent years have brought improvements to Georgia’s media landscape: media ownership transparency, satellite TV pluralism and an overhaul of the broadcasting regulatory authority. Violence against journalists is less frequent although threats are often reported. But the media continue to be very polarized and, despite some progress, media owners often call the shots on editorial content. And the war for ownership of the main TV channels is a source of concern about the future of pluralism,” RSF’s assessment reads.

Georgia’s score is higher than any of its neighbours. Georgia also scored better than Moldova and Ukraine as well as several European Union countries: Hungary, Italy, Cyprus, Greece, and Bulgaria.

Among Georgia’s neighbours, Armenia scored the highest result of 28.79 and took the 74th place. In a similar manner to Georgia, the country relatively jumped four places in the ranking, although it’s score declined. RSF’s described media situation in Armenia as a ‘mixed success’.

“The print media are diverse and polarized, investigative journalism prospers on the Internet, but pluralism lags behind in the broadcast media. In the crucial transition to digital TV, a future space for critical broadcasters will depend on the impartiality of the frequency bidding process. Police violence against journalists still goes unpunished but the Ilur.am news website and the Hraparak newspaper won an important legal victory in October 2015 when the constitutional court issued a ruling upholding the confidentiality of journalists’ sources,” RSF’s assessment reads.

Azerbaijan remains Europe’s lowest scoring country. Despite a slight improvement in the score, its 163rd place out of 180 makes it also one of the lowest ranked countries in the world.

“Not content with crushing all forms of pluralism, President Ilham Aliev has been waging a relentless war against his remaining critics since 2014. Independent journalists and bloggers are thrown in prison if they do not first yield to harassment, beatings, blackmail or bribes. Some independent media, such as Zerkalo and Azadlig, have been stifled economically. Others, such as Radio Azadlig, have been closed by force. In a bid to get the most recalcitrant (or those who continue to resist in exile, such as Emin Milli and Ganimat Zahid) to submit, the authorities also harass family members,” RSF’s assessment reads.

Russia and Turkey both experienced sharp decline with only Azerbaijan and Belarus scoring less this year among the countries of Europe.

Russia took the 148th place, four places up compared to 2015 despite the radical fall, and was described as a place with a ‘stifling atmosphere for independent journalists’.

“What with draconian laws and website blocking, the pressure on independent media has grown steadily since Vladimir Putin’s return to the Kremlin in 2012. Leading independent news outlets have either been brought under control or throttled out of existence. While TV channels continue to inundate viewers with propaganda, the climate has become very oppressive for those who question the new patriotic and neo-conservative discourse or just try to maintain quality journalism. The leading human rights NGOs have been declared ‘foreign agents’,” RSF’s assessment reads.

“President Recep Tayyip Erdoğan has embarked on an offensive against Turkey’s media. Journalists are harassed, many have been accused of “insulting the president” and the Internet is systematically censored. The regional context — the war in Syria and Turkey’s offensive against the PKK Kurds — is exacerbating the pressure on the media, which are also accused of “terrorism.” The media and civil society are nonetheless resisting Erdogan’s growing authoritarianism,” RSF’s assessment reads.

Overall, RSF writes that this year’s index is ‘indicative of a climate of fear and tension combined with increasing control over newsrooms by governments and private-sector interests’. The global overall score deteriorated by 3.71% in comparison to 2015 and 13.6% in comparison to 2013.