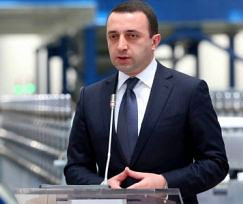 TBILISI, DFWatch–Georgia’s prime minister blames business leaders for causing the instability of the national currency lari by keeping their money in US dollars.

Irakli Garibashvili explained Wednesday during a visit to Batumi, a city on Black Sea coast, that he thinks the lari is through the crisis now.

“However businessmen keep USD, which makes it impossible to stabilize the lari rate,” he said.

The PM is confident that people will soon believe that lari is not having exceptional fluctuations.

Garibashvili said he has spoken with representatives of the National Bank, as well as experts in the Finance Ministry and elsewhere, who assured him that crisis is over.

“A simple thing is happening in Georgia now. People have false expectations that the lari rate will go down again in fall, which is not right,” he said.

Business leaders and others who keep their money in US dollars will sooner or later have to sell it and buy lari, he added.