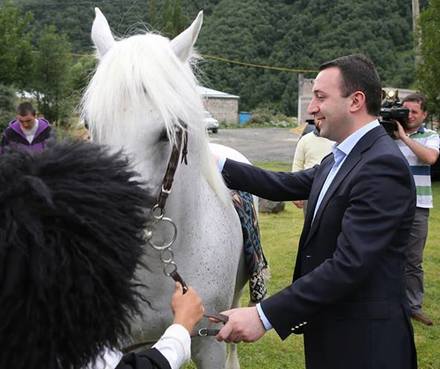 Prime Minister Irakli Gharibashvili was given a horse by Patriarch Ilia II. (Photo published on the PM’s Facebook page.)

The event took place at the end of a visit by the PM to the Patriarch’s hometown Sno in Kazbegi, northern Georgia.

The two visited Larsi checkpoint, which connects Georgia with Russia. They also visited a newly constructed church in Dariali valley.

It is unknown what the cost of the horse was, but if the price of a gift is more than 5 percent of the income of an official, they must transfer the gift to the Finance Ministry.