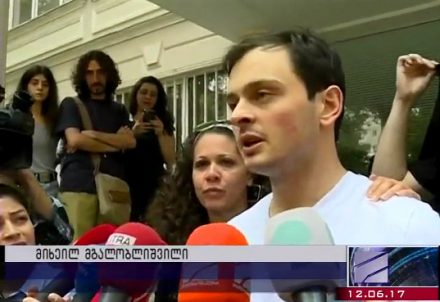 TBILISI, DFWatch–The Appeals Court in Georgia released on bail two rappers whose controversial arrest on drug charges may have hastened a review of the drug policy.

The court released the two on bail Monday after their arrest June 10 for possession of between 1.5 and 2.3 grams of ecstasy.

Both claimed the drugs were planted on them by police as revenge for a music video mocking a police man, and the prospect of them facing potentially 20 year prison sentences sparked protests and renewed debate about the draconian drug policy in Georgia.

Mishka Mgaloblishvili was released on 50,000 lari bail, while Giorgi Keburia’s bail was set to 20,000 lari. They have to hand in their passports to the court and appear at the police station once per week until their trial.

The two members of the rap band Birja Mafia were arrested separately on June 10. Police claim that Mishka Mgaloblishvili and Giorgi Keburia possessed 1.4965g and 2.3342g of ecstasy (MDMA), respectively. (The average user dose of ecstasy is around 0.1g.)

During their court hearing, both claimed that the drugs had been planted on them by law enforcers as revenge for a music video they recently posted online in which a police officer was portrayed in a derogatory manner.

Their arrest further undermined popular support for law enforcers, which took a serious blow with the abduction of an Azerbaijani investigative journalist.

Even the rapper son of Bidzina Ivanishvili raised his voice in support of the two, posting on his facebook page “I’m with you, guys. #FreeBirjaMafia”.

Giorgi Keburia thanked Bera upon his release from custody.