Georgian world boxing champion arrested in the US

Georgian world boxing champion arrested in the US 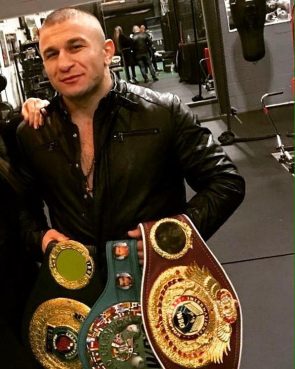 TBILISI, DFWatch–A Georgian world boxing champion has been arrested in the United States along with a martial arts practicioner, also from Georgia, for alleged ties to a Russian crime syndicate.

Khurtsidze was slated to hold a championship fight against Billy Joe Saunders on July 8, but it has been postponed as a result of his arrest.

Writing on Facebook, Khurtsidze called what has occured a ‘misunderstanding’.

“Friends, as you know, I went to America yesterday to prepare for the July 8 fight. Immediately after arriving in New York, there was a very serious misunderstanding. I hope that in the near future everything will be cleared up and I will continue to prepare for the fight against Sanders. Thank you for every moment I feel your support!” Khurtsidze who has a brilliant professional record of 33 wins, 2 losses and 2 draws, wrote on his Facebook.

Altogether, US Department of Justice indicted 33 individuals, mostly with Georgian surnames, for a range of charges including racketeering, fraud and drugs. Razhden Shulay, thief-in-law or “vor”, was among the detainees. Five persons remain at large.