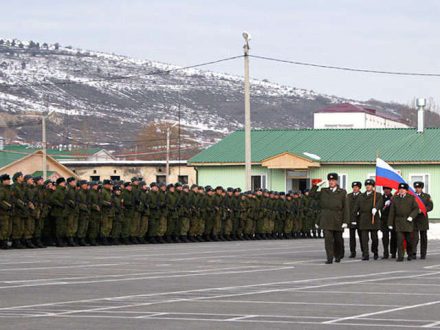 TBILISI, DFWatch–Official Tbilisi condemns a decision by Russia to merge the armed forces in the breakaway territory South Ossetia with the Russian army. Russia’s State Duma ratified the move on Wednesday.

South Ossetian militiamen may now enroll in the Russian military, and many are expected to be stationed at one of the four Russian facilities operated in the territory of the breakaway republic.

Georgia’s Ministry of Foreign Affairs said in a statement that the move was in ‘full disregard of the fundamental norms and principles of international law’.

“Through integration of Georgia’s occupied regions into the military system of the Russian Federation, Moscow blatantly violates the EU mediated 12 August 2008 Ceasefire Agreement. This is all the more disturbing that the Russian Federation still declines to take and respect the commitment on non-use of force and deliberately impedes the establishment of international security arrangements on the ground,” the statement reads.

“We appeal also to the international community to duly assess Russia’s far-reaching aggressive policy and take the effective measures in order to counter the ongoing illegal processes in Georgia’s occupied territories,” the ministry states.

President Vladimir Putin and the de facto leader of South Ossetia, Leonid Tibilov, signed an agreement on incorporating militia controlled by Tskhinvali into the Russian army in March, 2017.

The document allows South Ossetian militia to voluntarily enroll in the Russian army anywhere, but most likely they will do it in the four military facilities that Russia operates in South Ossetia, head of Tskhinvali’s general staff Nikolai Feodorov said.

The agreement also enables the South Ossetian military to get supplied with more up-to-date equipment and weapons by Russia.