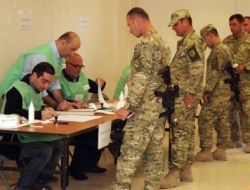 TBILISI, DFWatch–Georgian troops serving within NATO’s Resolute Support Mission in Afghanistan cast their ballots on Wednesday, three days prior of the parliamentary elections, which is scheduled on Saturday, Oct. 8.

The voting box has already been sealed and sent back to Georgia, according to the information released by Ministry of Defense of Thursday.

The Elections Administration (CEC) sent 19-member team in Afghanistan to organize two election precincts. Members of the fifth infantry brigade 52nd battalion voted in American Bagram Air Base, while company of the second infantry brigade voted on the German base in Mazar-i-Sharif.

The results of the voting in Afghanistan will be published along with the results from the Election Day, October 8.