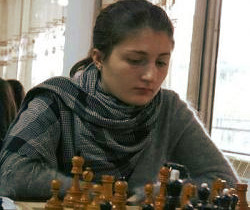 TBILISI, DFWatch–Georgian chess player Nino Batsiashvili took silver at the European Women’s Individual Chess Championship 2015, which was held in Chakvi, Georgia from May 18 until May 30.

In all, there were 97 chess players from 19 countries competing for the top spot.

Suspicion arose among players that Romanian Mihaela Sandu was cheating, and organizers introduced a 15 minute delay in the Internet transmission of rounds 8 to 11. Tournament director Giorgia Giorgadze wrote that the accusations against Sandu were unfair, and underlined that bringing false accusations is also penalized.

About a month ago, the Georgian women’s chess team won the World Women’s Team Chess Championship 2015. The Georgian team won every game except the one against Russia, which ended in a draw.

That championship was held in China. The other top teams were India, Ukraine, Kazakhstan, Armenia, Poland, the United States and Egypt.