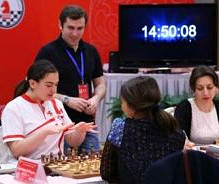 Georgia scored 17 points in the competition. The team won every game except the one against Russia, which ended in a draw.

The championship was held in Chengtu, in the Sichuan province of China. Also finishing among the top ten were the teams from India, Ukraine, Kazakhstan, Armenia, Poland, the United States and Egypt.

This is first time Georgia has won a world championship as a team. InKazakhstan in 2013, the Georgian team ended third.

Individual women’s world champions from Georgia include Nona Gaprindashvili (1962-78) and Maia Chiburdanidze (1978-91), who won the title five times each.

In May, the European Woman’s Individual Chess Championship 2015 will be held in Chakvi, a coastal resort of eight thousand people in the west of Georgia.