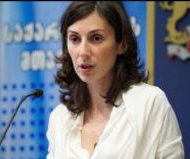 TBILISI, DFWatch–A Georgian politician was on December 17 officially appointed as deputy interior minister in Ukraine, the same post she held under President Mikheil Saakashvili in her home country a few years ago.

Eka Zghuiladze is now first deputy to Interior Minister Arsen Avakov, who was the one to appeal to President Petro Poroshenko to grant Ukrainian citizenship to Zghuladze.

Minister for Social Policy Pavlo Rozenko posted a photo of Zghuladze during her appointment and quoted her saying that this was a measured choice, not ‘adventurism.’

Zghuladze follows after Alexandre Kvitashvili, another former Georgian politician who has been brought into the post-coup government in Ukraine. He serves as health minister, the same position as he held in Georgia under Saakashvili.

Ukrainian Media two days ago reported that Vladimer (Lado) Gurgenidze, who was prime minister of Georgia from November 2007 to November 2008, will be consultant for the Ukrainian government in implementation of reforms.

Ura Inform quotes Boris Lozhkin, the head of the president’s administration, saying that he thinks Gurgenidze is an ‘excellent specialist.’ He also said that Ukraine needs people like Kvitashvili, who ‘reject corruption and have a broad view.’

Former Economy Minister Kakha Bendukidze, who in November died of heart failure, was also considered as an economic consultant to the new government in Ukraine.