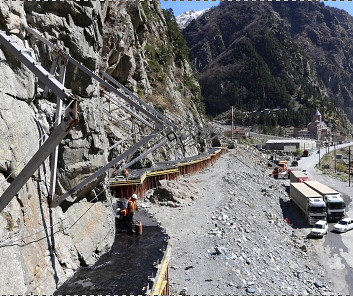 New evacuation facilities were recently built near the Georgia-Russia border crossing to protect against landslides, which claimed eight lives in 2014. (Interpressnews.)

TBILISI, DFWatch–Georgian PM Giorgi Kvirikashvili on Tuesday promised to build a new highway that will improve the road connection between Tbilisi and the Russian border.

“Within the next four years, we plan to build a highway from Mtskheta to Vladikavkaz,” Kvirikashvili said during a meeting
with representatives of small and medium sized businesses.

He explained that the plan is to build a road from Mtskheta to the border crossing at Larsi, which will continue to Vladikavkaz, the capital of the Russian republic North Ossetia.

Before Larsi, the road passes through Dariali Valley, which will be avoided by tunnels where the Devdoraki glacier has caused several catastrophic landslides in recent years. The government recently built landslide evacuation facilities near the border crossing, costing 1.2 million laris.

“There will be a paid road which will be connecting by tunnels. Thus it won’t be necessary to go through Gudauri in order to reach Stepantsminda. We also want this road to completely bypass the Devdoraki road section, as there is always a problem when the ice is melting,” Kvirikashvili said.

The PM said that in order to carry out the project it will be necessary to partner with Russia. The road might be wider than today, but this will be decided by engineers. The plan is to construct a road which complies with international standards.

In order to attract tourists from Vladikavkaz, work has been launched to construct ropeways from Kobi to Gudauri, which will make it possible to turn Stepantsminda into a very important winter resort, according to the head of government.

The PM said there are many new infrastructure improvements planned for the next four years.

A highway from Tbilisi to Lagodekhi, connecting with Azerbaijan; a highway from Kutaisi to Svaneti through Tsageri and Lentekhi; one more road from Kutaisi to Abastumani and the motorway east-west through Georgia will be completed within four years, after which it will run all the way from Sarpi border crossing with Turkey to the Azerbaijan border at Red Bridge and the Armenian border at Sadakhlo.