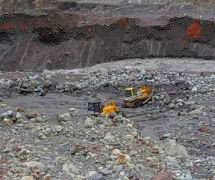 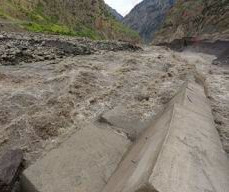 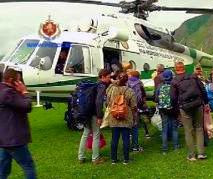 TBILISI, DFWatch–Georgia airlifted 60 people to the border crossing at Larsi on Sunday. The travellers had been stuck in Kazbegi since Thursday night, when a mudslide cut off a section of road in Dariali Valley.

The Ministry of Internal Affairs (MIA) said around 60 people who were heading to Russia were transported by helicopters belonging to the Georgian border police.

A mudslide struck in the night of June 23, destroying an 800 meters long section of the Mtskheta-Stepantsminda-Larsi road, according to the Road Department. No-one was injured, but some people were stranded along the road, MIA said.

Two years ago, in 2014, the road through Dariali Valley, which connects Russia and Georgia, was hit by two catastrophic landslides. Six people were killed in May, while two more died in another landslide in August that year. The cause was that large masses of ice broke loose from Devdoraki Glacier.

Since then, the government has installed a warning system. When authorities last week received warning of heavy downpour in the mountains, this enabled them to close the road and evacuate tourists, locals and employees at Larsi border crossing in time to avert further tragedy.

The road is still closed between the 134km and 135km mark along the Mtskheta-Stepantsminda-Larsi road, above the village Gveleti, and the border crossing to Russia is not operational.

Meanwhile, the Road Department has begun clean-up work and repairs along the bed of the River Tergi. The river changed its course after being flooded, and digging work is now underway to get the river back to where it ran before Thursday’s mudslide.