Georgian PM: We are ready for negotiations with Russia

Georgian PM: We are ready for negotiations with Russia 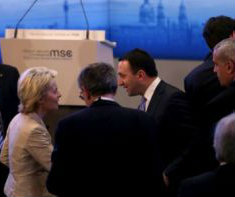 TBILISI, DFWatch–Prime Minister Irakli Garibashivli says Georgia is ready for negotiations with Russia. The two countries have not had diplomatic relations since fighting a brief war more than six years ago.

Georgia’s pro-European course stands firm, the PM underlined at the Munich security conference on Saturday, but his country is nonetheless ready to negotiate with Russia.

Georgia broke off relations with Russia in the wake of the 2008 war, but after a new coalition came to power in 2012, a new channel of direct talks has enabled the resumption of trade and economic cooperation.

Negotiations with Russia is a highly controversial issue in Tbilisi. Garibashivli acknowledged this by adding that any negotiations must be carefully prepared. His administration has taken constructive steps but hasn’t receive an adequate response from Russia, he said.

Georgia considers the two breakaway regions Abkhazia and South Ossetia occupied by Russia and has warned about a creeping annexation as both regions seek closer ties with Moscow.

The occupied territories do not have a future without Georgia, Garibashvili underlined.

And then there’s the refugees from the wars more than 20 years ago, people who are expected to be able to return at some point.

The PM said as a result of the conflict with Russia, there are more than 400,000 refugees and Georgians who have been ethnically cleansed.

Garibashvili drew a parallel between the problems Georgia has had, with today’s war in Ukraine, which could have been avoided if more attention had been paid to what happened in the 2008 war.

He said the international response to the events in Ukraine is more adequate than what was the case in Georgia.

The crisis in Ukraine could have been avoided if sanctions had been brought against Russia in 2008, Garibashivli said during a session about the Ukraine crisis on Saturday.

Current day events in Ukraine are a continuation of the 2008 war between Russia and Georgia, he argued.