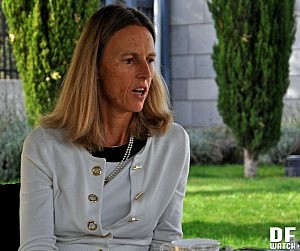 “Georgia is not a post-Soviet state. It is a European state […] So, looking at a free trade agreement with the U.S. is kind of a maturing of the relationship.”

To assess the recent visit of Georgian Prime Minister Giorgi Kvirikashvili to the U.S., Voice of America’s (VOA) Anna Kalandadze interviewed British diplomat and a political observer Alexandra Hall Hall. She served as a UK ambassador to Georgia from 2013 to 2016. Now she resides in the U.S. and is a senior fellow at the Dinu Patriciu Eurasia Center in Washington, DC.

Anna Kalandadze: What is your biggest takeaway from Georgian Prime Minister’s visit to Washington, DC?

Alexandra Hall Hall: I think it’s been a very successful visit. The fact that the Georgian government has secured such high level access across such a wide number of departments in the U.S. Government and also a face-to-face meeting with the President himself is really testament to the fact that this U.S. Administration, like previous Administrations, values the relationship with Georgia. And I think the biggest takeaway is that this is an enduring relationship. It transcends changes in Administration.

A.K.: We have seen in recent days some of the big moves by the Administration, as well as the U.S. Congress in support of Georgia’s sovereignty. Do you see this as a fact that the U.S. is trying to reengage with Georgia more closely?

A.H.H.: I think this is a continuation of a long developing strategic partnership. The U.S. has been a very firm friend of Georgia, has always supported its territorial integrity; has always been sympathetic to Georgia’s Euro-Atlantic aspirations. And over the years that relationship has just got stronger and stronger. Georgia has always had friends in Congress. So the fact that there is now a bipartisan support expressed in a letter reaffirming the U.S. support for Georgia’s territorial integrity, I think is just another clear signal of a very strong support that U.S. has always given to Georgia. I think it’s really significant that the President and his administration have explicitly mentioned that support in the most recent budget appropriations decision. There is now an explicit reference to the fact that the U.S. supports Georgia’s territorial integrity and will not allow U.S. funds to be given to countries, or entities that recognize the breakaway regions of Abkhazia and South Ossetia. That is a very significant development, but it is consistent with the trend of U.S.-Georgia relations over the 25 years of the partnership.

A.K.: Despite America’s huge effort to support Georgia’s sovereignty we still see Russia’s creeping annexation of Georgian territories. What more can the U.S. do to help Georgia avert Russian aggression and avoid the tragedy of 2008?

A.H.H: I think the Russian activities in Abkhazia and South Ossetia are always a provocation and they are designed to unsettle Georgia and the Georgian people. I think the way the Georgian government and the Georgian people have handled it is learning to stay focused on their strategic objective, not to overact, but to always restate their position of principle. And the Georgians have been very sensible and continuing to pursue the Geneva international discussions and continuing to use every forum at their disposal: the UN Security Council, the OSCE, another international forum whenever opportunity arises to constantly make the international community aware of the situation. And then I think Georgia’s friends in the international community like the U.S. through those constant statements send a very strong signal to Russia that it still regards this is a breach of international law, it is not a fait acompli. SO, I think that is the right way to handle this: never to let it be somehow accepted that this is just the way it is and there can be no turning back.

A.K.: Can Georgians hope for a high level U.S. visit to Tbilisi any time soon to better cement the ongoing bilateral relations?

A.H.H.: I’m the wrong person to ask. I’m not a U.S. diplomat. I’m not in the U.S. Administration. So, I don’t know what they may be considering now. All I can observe as an outsider is that the U.S. government has gone out of its way to celebrate the 25 years of diplomatic relations and to signal their continued support for Georgia. I know that the Prime Minister has invited President Trump to visit Georgia. I know that senior Senators from U.S. Congress, like Senators McCain and Lindsay Graham went to Georgia earlier this year. And I know that over the years previous U.S. Administrations have regularly sent high level delegations to Georgia to underscore that enduring partnership. So, I would not rule that out, but I’m not in a position to say whether for sure it will happen.

A.K.: What message do you think Moscow will get after Georgian PM’s successful trip to Washington?

A.K.: And the last question. Do you think Georgia officials are communicating their most pressing needs to the U.S. Administration, or the U.S. Congress well enough so that the U.S. assistance is channeled more appropriately?

A.H.H.: I have to say the Embassy in Washington seems to be doing an incredible job. They had your Foreign Minister here [and he] was the fourth Foreign Minister to meet Secretary of State Tillerson. You have now the Prime Minister coming through. There’s been a really good high level interaction. There has been an engagement on the hill. There’s been a hearing and testifying on the hill. There have been interactions with a think-tank community. So, I think there’s been a very impressive set of outreach. And in terms of their priorities, it is not just security priorities.

Georgia deserves credit for getting visa liberalization with the EU, for continuing to implement the substantial package with NATO. I think what’s been very interesting about your current government is the emphasis that they are putting on economic development. There’s a clear desire to make a success the free trade agreement with the EU. There’s an aspiration to develop a free trade with China and India. And I think one of the key aspirations on this visit here was to explore getting a free trade agreement with the U.S. And I think that’s really important. I think it helps round out the relationship. It’s not all about Russia. And it should not all be about Russia. Georgia is not a post-Soviet state. It is a European state. In a region it stands out for its democratic values and it stands out for its aspirations. So, looking at a free trade agreement with the U.S. is kind of a maturing of the relationship.

(This interview was recorded by Voice of America’s Anna Kalandadze.  It originally ran on VOA Georgian TV in Georgian language.  The author is chief of Voice of America’s Georgian service in Washington DC.  You can follow her on twitter at @anavoa or read more of her interviews at voanews.com/georgian.)