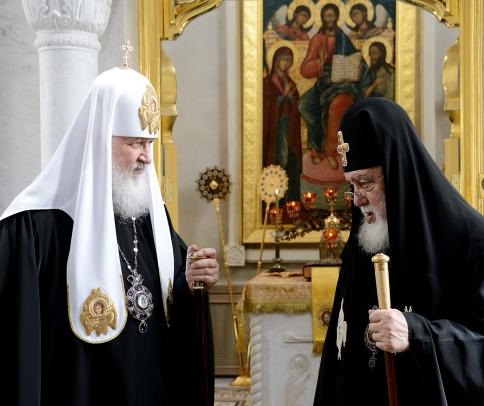 TBILISI, DFWatch–Georgia’s Patriarch Ilia II, who visited Russia for the 1025th anniversary of the Baptism of Rus, met with the Russian Patriarch Kirill I and invited him to Georgia.

The meeting was held in Moscow on July 23 at the Russian Patriarchate to discuss religious issues in post-Soviet countries, also future relations between Georgian and Russian churches.

The Russian Patriarch awarded Ilia II with the order of Honor and Dignity.

July 25 Patriarch Ilia II attended a meeting at the Kremlin, which was organized by the Russian president Vladimir Putin, who hosted heads of different local churches. The meeting brought together the heads and senior clergy of the 15 Orthodox Churches: the Patriarchates and Orthodox Churches of Constantinople, Alexandria, Antioch, Jerusalem, Russia, Georgia, Serbia, Albania, Romania, Bulgaria, Cyprus, Poland, the Czech lands, Slovakia and Greece, as well as the Russian Orthodox Church in America.

“Our nation will continue to take an active, constructive position aimed at advancing a rapid political resolution to conflict situations. In these situations, we place great importance on fostering productive interreligious and intercultural cooperation,” President Putin outlined at the meeting.

“And naturally, active participation and support by regional autocephalous Orthodox churches and its primates are very important for us.”

Ilia II’s visit continues in Kiev and will end in Belarus on July 30. As part of the visit he meets with the presidents of Kiev and Belarus.