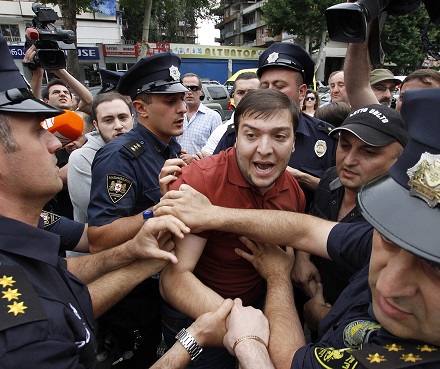 Three were detained during the protest outside the National Movement party conference in Tbilisi on Sunday. (Interpressnews.)

TBILISI, DFWatch–Davit Bakradze, leader of the parliamentary opposition, has been announced as the National Movement’s official candidate for the upcoming presidential election.

UNM’s sixth and final primary election was held on Saturday in Tbilisi. The final conference also took place against a background of protests outside. Three were detained.

Davit Bakradze, former Speaker of Parliament, has won all six primaries. The UNM has held primary elections as part of party conferences over a period of several months and in different regions of Georgia.

In his speech Bakradze invited Giorgi Margvelashvili, the Georgian Dream coalition’s candidate, to take part in a series of debates. 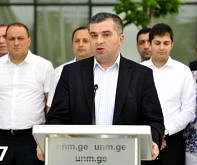 He said the debates will include all the other presidential candidates too.

“I respect all other candidates, but it is principally important for two major political forces, United National Movement and Georgian Dream coalition candidates to sit down and in a civil way with debates show people what proposals we have,” he said, adding that it will be necessary for the coalition’s candidate to prove that his major value is not just personal friendship with the prime minister.

Margvelashvili has not yet responded to his proposal.

Three persons were detained during the protests outside the UNM conference. Irakli Chubabria, from Free Georgia, former political prisoner Pridon Merebashvili, and Davit Chantladze. They still remain in detention. Those who were detained during previous rallies against UNM were released the same day and received a 100 lari (USD 60) fine.