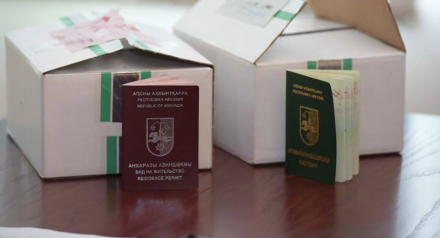 GALI, DFWatch–Abkhazia has temporarily suspended the issuing of residence permits, an essential document needed by Gali residents in order to travel to Georgia proper.

Breakaway authorities in Gali claim the reason is a technical problem with a printing machine, locals DFWatch spoke to explained. They were told that the printer had run out of ink.

“The printer has run out of ink and it’s so expensive, the administration can’t afford to buy a new one, we were told,” a resident of the village Chuburkhinji in Gali municipality said.

The locals also point out that in their opinion, as in other cases, it looks like a trick to earn money for local bureaucracy and nothing more.

“How can you have ambitions about statehood and set such an excuse for refusing to issue such a document. They’ve got another trick to earn money, and people have no means to resist,” a Gali resident told DFWatch.

The residence permit, which locals refer to by the Russian phrase “Vid Na Jitelstva”, costs local ethnic Georgians about 500 lari (USD 183). The breakaway authorities have already canceled the old Soviet ‘red’ passports, and locals expect them to also halt the issuing of ‘green’ (Abkhaz) passports to Georgians after New Year’s.