Convicted murderer may be free one day after president converts sentence

Convicted murderer may be free one day after president converts sentence 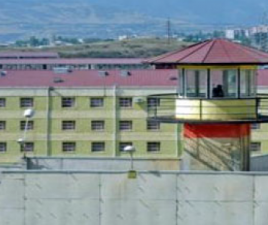 TBILISI, DFWatch–President Margvelashvili on Thursday converted the sentence of a man so he will no longer need to spend the rest of his life behind bars.

The head of the president’s pardon commission Zviad Koridze said the most serious crime the prisoner is convicted for is premeditated murder.

He has served more than 15 years in prison already and after the president’s decision, he will have to serve 10 more years, so 25 years in total.

The pardon commission, one of two such bodies in Georgia, considered the case at sessions on February 25-27 and gave a positive recommendation in the case of this prisoner.

Up to 60 prisoners with life-long sentences were on hunger strike in February, demanding that their cases are given a new review and that their sentence are converted to fixed term instead of life. They wanted to be included in a mass amnesty which took effect in early 2013.

Earlier this month, the president converted the sentences of three more prisoners with life sentences.