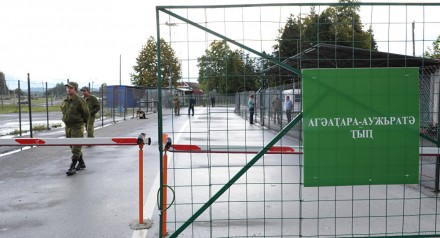 An ethnic Georgian man was fatally wounded by an Abkhaz border officer in an incident that occurred at the Khurcha-Nabakevi checkpoint at the de facto border with Abkhazia, inside the territory under control of Georgian authorities.

The video (+18) from a surveillance camera distributed by Rustavi 2 shows how four men in uniforms assault on a young man in civilian clothes. One of them punches and then kicks the man, while other approaches him apparently with a pistol and shoot at him point-blank.

The wounded man, identified as Giga Otkhozoria, 30, died on his way to the hospital in Zugdidi. He was native of Abkhazia’s Gali district.

Aleksi Chikvaidze, the representative of the de jure Abkhazian government in Samegrelo–Zemo Svaneti, told DF Watch that Giga Otkhozoria lived in an IDP settlement in Zugdidi. At the time of the incident, he was escorting a relative to the village of Nabakevi, which is located on the territory controlled by the de facto Abkhazian authorities.

The body of Mr Otkhozoria was transferred from the Zugdidi Hospital to Kutaisi for an autopsy. A relative of Mr Otkhozoria, who witnessed the incident, was also brought to the hospital with a heart attack.

A small stream separates the checkpoint between Khurcha and Nabakevi, which is patrolled by Russian border guards and Abkhaz customs officers. There are no police on the Georgia-controlled part of the crossing.

Russian Ministry of Foreign Affairs denied any involvement of the Russian border guards stationed along the administrative border with Georgia proper.

Later, Russian news agency TASS distributed a statement by Abkhazia’s de facto Prosecutor Office, which states the man was killed by Abkhaz border guards after a brawl. The Office launched an investigation on the case and will request information from the Georgian side at the next round of Geneva talks on June 14-15.

Ministry of Foreign Affairs of Georgia issued a statement condemning the killing and squarely laying responsibility to the Russian side.

“Full responsibility for it lies with the Russian Federation as with the power in effective control of the region,” the statement reads.

European Union Monitoring Mission in Georgia stated that ‘armed security actors from the Abkhaz side of the bridge crossed over to Tbilisi Administered Territory (TAT) and carried out the shooting.‘