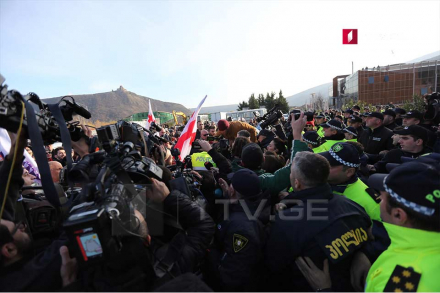 Confrontation between opposition and pro-government activists in Mtkheta. (1tv.ge)

The Georgia Dream has employed a new tactic to check anti-government protests throughout Georgia, which includes unleashing violent gangs of their supporters to confront activists verbally and physically, opposition claims.

This invokes a parallel with Euromaidan when the government of pro-Russian leader Victor Yanukovych unleashed gangs of unidentified young men to attack and beat opposition activists protesting in the streets, they say.

On Tuesday the opposition staged a rally to protest beating of youth activists at the office of Gori municipality, 80 km east from Tbilisi.

Two opposing group were standing in front of each other divided by a police cordon. Despite this in several occasions clashes erupt between sides.

The similar confrontation was seen also in Kutaisi, wester part of the country.

At least ten people were injured in two separate occasions in Tbilisi and Mtskheta during physical confrontations between opposition youth groups and government supporters on Monday.

The opposition insists these events indicate the ruling Georgian Dream party has employed a new tactic to oppose the wave of protests by resorting to the downright violence.

Members and supporters of the GD party, as well as those holding public offices have taken part in violent actions against protesters, opposition claims.

The government, on its part, claims that all confrontations were provoked by opposition.

Some of opposition politicians even dubbed the government’s violent supporters as “titushki”, a derogatory term attributed to the pro-Russian violent gangs during Euromaidan.

The pro-government rallies are staged by those people who remember brutality during the reign of Mikheil Saakashvili government in 2003-2012, the government supporters say.

“Aren’t these young people the children of those parents who were tortured, raped and deprived of their property [during the reign of Saakashvili government]?! No one can prevent them to express their emotions,” Anri Okhanashvili, the head of the parliament’s legal committee said about members of the violent counter-rallies.

This infamous violence is supported by the police, they detain protesting youth instead of those who commit violence, said Giga Bokeria, MP of opposition European Georgia.

The opposition has held dozens of rallies throughout Georgia to protests breaking promise by the government to hold 2020 general elections by fully proportional system since November 14. All efforts to reach compromise have failed so far.