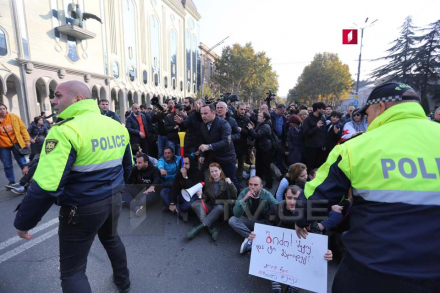 TBILISI, DFWatch–Thousands of people rallied onTbilisi’s Rustaveli Ave on Thursday, after parliament failed to adopt a bill to use a proportional system during the 2020 general elections.

The switch to proportional system, a long-standing demand by almost the entire opposition spectrum, was a promise by the ruling Georgian Dream party in the wake of “Gavrilov Night” protests in June.

At least eight Georgian Dream MP’s, including First Deputy Chairperson of the Parliament Tamar Chugoshvili, announced they are leaving the ruling party to protest its behavior during Thursday’s hearing, when parliament members discussed the constitutional changes that include a full-blown switch to proportional system.

Meanwhile, opposition parties gathered at the office of Labor Party to announce their future plans.

Some among the opposition call for the immediate resignation of the PM and a snap parliamentary election.

Georgian Dream leader Bidzina Ivanishvili puts the blame on the opposition, claiming that the hearing in the parliament was sabotaged by opposition politicians.