Georgian Dream hesitates over inquest into destruction of gold mine

Georgian Dream hesitates over inquest into destruction of gold mine 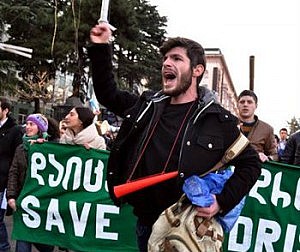 Protesters were outraged when the Culture Ministry suddenly allowed RMG Gold to proceed with mining blasts at Sakdrisi in December. (DF Watch.)

TBILISI, DFWatch–Doubt has been cast on the Georgian parliament’s plans to have an inquest into the destruction of a prehistoric gold mine, as a leading parliamentarian says he no longer thinks it’s a good idea.

The ancient cave complex in Sakdrisi in southern Georgia was blasted with explosives last December as Russian mining company RMG Gold sought to extract gold there. Most of the archaeological parts have now been destroyed, containing 5,400 years old human traces and artifacts.

Following public protests, parliament decided to put together a committee to investigate what happened.

But nothing has been done so far, and now, leader of the Georgian Dream faction Gia Volski says having such a commission is ‘speculative’ and wouldn’t ‘guarantee a healthy discussion’, but only ‘create a sense of scandal’.

It was the Free Democrats who came up with the idea to have an inquest into the Sakdrisi case; the party which left the government coalition after five bureaucrats in the ministry headed by party leader Irakli Alasania were detained and accused of corruption, prompting his resignation.

58 MPs voted for setting up the commission. Among those were the Republicans, including the speaker, the National Forum, the National Movement and a few MPs from the government coalition.

Those who voted against, were MPs from the Entrepreneurs Party and the Conservative Party – 14 in all.

The idea was to have a 12 member commission to look into events the led to the destruction and halt work until the inquest is finished.

But even though a majority voted in favor of having the commission, it hasn’t been created yet, newspaper Sakartvelos Respublika reports.

Not only Volski is against, but also other representatives in the Georgian Dream faction.

Nino Goguadze, member of the Free Democrats faction, told online newspaper for.ge that what parliament should be debating now is how to create the commission, not whether or not to create it. She thinks if there isn’t created a commission, it confirms the idea that the government committed a crime when it gave RMG Gold a green light to proceed with mining work at Sakdrisi, in spite of a court order.

Members of parliament for the National Movement and Republican Party are still in favor of putting together a commission. The ones who decide its fate are Georgian Dream, the Entrepreneurs and the Conservative party. 76 votes are necessary to make this kind of decisions in the 150 member Georgian parliament.

One representative from the Entrepreneurs, Zurab Tkemaladze, said he thinks it’s not necessary for parliament to investigate the case at the same time as there is a lawsuit and the Prosecutor’s Office is also investigating the case.

It seems likely that the question of what happened to Sakdrisi will come up again at parliament’s spring session, which starts on February 3.

More than a month ago RMG Gold resumed mining work at Sakdrisi and according to some scientists, most of the archaeological significant parts were destroyed by the blasts.