Georgian Dream denied to use number 7 on the ballot

Georgian Dream denied to use number 7 on the ballot 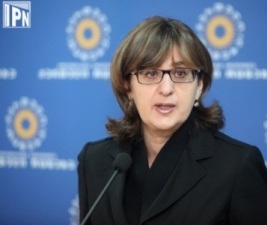 Maia Panjikidze, spokesperson for the Georgian Dream coalition, says the decision shows that the government is afraid. (IPN.)

TBILISI, DFWatch – The largest opposition bloc in Georgia was denied to register under the number seven on the ballot in the upcoming parliamentary election.

Representatives of the Georgian Dream coalition say that they have asked the Central Election Commission (CEC) to register their bloc under the number seven, because the Conservative party, one of the bloc members, had the number seven in previous elections, which they claim is legal grounds for the bloc to ask and register under this number.

The CEC on Monday responded to the complaint from Georgian Dream, explaining that in order for a political bloc to use a number previously used by one of its parties, it is necessary that all member parties of the bloc participated in the parliamentary elections in 2008. Otherwise, the number will be decided through a ballot before August 25. The CEC cites article 119 of the Election Code as the legal basis for this.

Tamar Chugoshvili, head of Georgian Young Lawyers Association, told Interpressnews that this article of the Election Code does not mean what the CEC claims it does.

She says this regulation is vague and has room for interpretation. It is about the word ‘all’, which is not directly stated in the law.

“The regulation doesn’t clearly define that all member parties of the bloc should have participated in previous elections in order to use the number of one of its member parties,” Tamar Chugoshvili explains. “We think that this regulation gives opportunity for interpretation and the CEC can define it in this way or that way. In this case the CEC makes an explanation which is very narrow and which is not in the interest of a certain political party.”

Maia Panjikidze, spokesperson for the Georgian Dream coalition, says this action indicates that the government is afraid.

“I want to tell the government and the National Movement subordinate CEC that Georgian Dream will win the election under number 7, 47 or 77 or with no number at all.”

Members of the Georgian Dream coalition request to meet with the OSCE delegation which has arrived in Georgia for the election period to meet with different officials of the country.

The member parties comprising the Georgian Dream bloc are: The Republican Party, Our Georgia the Free Democrats, National Forum, Industry Will Save Georgia, the Conservative Party and Georgian Dream Democratic Georgia, which was set up after Bidzina Ivanishvili went into politics, so it hasn’t participated in previous elections.