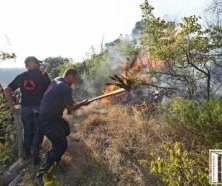 A storm helped put out the forest fire after two days, but the storm damaged crops and villages. (IPN.)

TBILISI, DFWatch – 15 acres of forest has burned down in eastern Georgia despite two days of attempts at extinguishing it.

The fire occurred in the village Artana, which is 21 km from Telavi, the largest city in the Kakheti region. Beech, hornbeam and chestnut trees were destroyed.

“It was a strong fire. The forest was burning for two days. On the third day we managed to extinguish the fire. Late night rain made it easier for us,” ICK quotes Levan Akhalmosulishvili, Deputy Head of the Emergency Service saying. He says what caused the fire was negligence by shepherds.

The was a storm at the time, which helped to put out the fire, but the storm damaged a number of villages, affecting the local population and destroying the harvest. Locals expect compensations from government, as they have mortgages to pay.