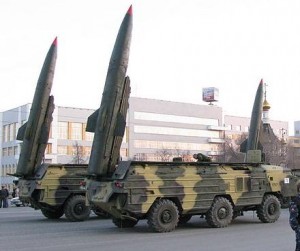 SS-21 short range tactical missiles, which were deployed in South Ossetia one year ago. The region's closest point is fifty km from Tbilisi. The "Tochka's" range is 120 km.

Foreign military attaches were briefed about the exercise at a meeting in Moscow last December with the head of the Russian military’s chief of staff. It will involve not only army but also border guards, air force, interior ministry, security and emergency services, as well as what is called the Air Defense Force Management System.

This air defense system controls not only Russian skies but also covers the South Caucasus, justified by the need to protect the Russian base in Armenia, Nezavisimaia Gazeta reports.

According to Russian defense sources, unlike in previous exercised, this year it will also take place inside Georgia’s breakaway regions, Abkhazia and the South Ossetia, as well as in Armenia.

Georgia’s Foreign Ministry warned Tuesday that the exercise is offensive in nature and a provocation meant to stoke ‘permanent tension’ in Georgia and the Black Sea region.

“The international community should pay attention to the fact that the Russian foreign policy is not changed. It continues aggressive actions, including demonstrating military forces and provocations. Russia is the source of destabilization and negative events on the international arena,” the statement says.

But Nezavisimaia Gazeta reports that the background for the exercise is increased tension in the Persian Gulf and the danger of a U.S.-Israeli attack on Iran and that this would necessitate steps to protect the Russian troops stationed around the Caucasus region.