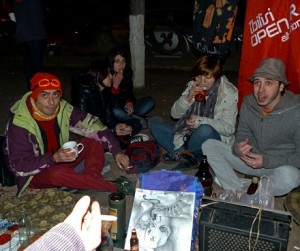 The rally was titled ‘Minifest as Manifest’ and saw another brandishing of paintings, handicraft and other artwork as well as refreshments and entertainment that continued into the night.

Gudiashvili lies just behind Freedom Square, and to visitors it is probably best known as the place where Cafe Pur Pur is located. It is one of those places in the old part of Tbilisi with narrow streets and tightly spaced houses that are barely standing and sorely need reinforcement works.

Tbilisi City Hall has a plan for giving the area a face lift which protesters however fear is too radical and will destroy its historic qualities.

The main request of the rally’s organizers and supporters is for the government to reinforce the buildings surrounding the square. 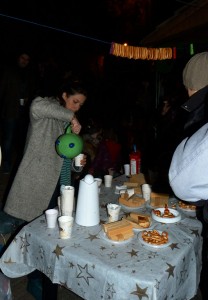 Refreshments were available in the relatively mild January night.

The history of the square begins several centuries ago, just like the buildings around it. The houses are the same height in different colors which are fading away. Cracks in the walls, old balconies and windows, roofs; it is all like a faint memory of what must have been here a long time ago.

In 2007 the government put up a new iron fence, and installed a fountain and improved the road.

Recently news of a new development plan was brought to public light, and caused a protest against the way the city’s planners have progressed with their ideas and the level of secrecy.

A foreign website mentioned the square and a tender which some company had won to develop it, and the plan said it is going to completely change the face of the square. They even published drawings of what the future square will look like.

However Tbilisi City Hall refused and said that only rehabilitation work is planned. The website of City Hall now says that the constructive strengthening of the buildings is planned and restoration of the historic facades. 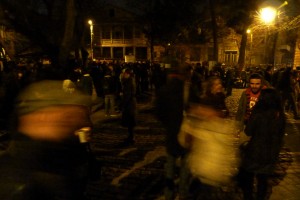 More than a hundred people were there Sunday, with people coming and going. Visitors can follow painted signs in the streets to find their way to Gudiashvili, which can be difficult to find the first time, due to the maze of narrow streets that surrounds it.

City Hall’s website says that the plan found on the foreign website is ‘a private initiative and has nothing to do with Tbilisi City Hall.’

“As they explained to us the competition is only conceptual and doesn’t have an architectural sense,” City Hall’s statement says.

However, the organization Tiflis Hamkari, which works to protect Tbilisi’s historic heritage, published a document of an agreement about sale and purchase of real estate: Gudiashvili Square. The contract is signed by Irao Magnat Gudiashvili LLC. There is a company called Irao which is involved in many real estate projects in Tbilisi.

“According to Tbilisi city hall and other representative of government such document does not exist, as the square was not sold,” the group says in a statement, adding that they have requested this information from Tbilisi Development Fund. 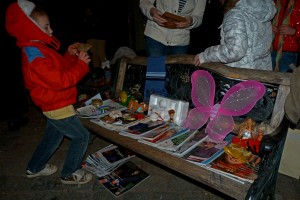 Some also brought collectables to sell.

According to the statement, the first page of the contract is missing, which may contain important information.

On Sunday already as a tradition many supporters or people just passing by gathered together on the square preparing various activities for entertainment.

A dance competition was also held and the winners received a prize of 100 lari.

The ‘Minifest as Manifest’ rally ended late in the evening with music by several popular Georgian bands; Kung Fu Junkie, Me and My Monkey, ZurGi, Smile and others.

The next event is planned for January 29.