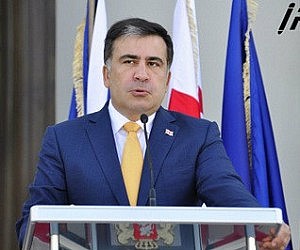 TBILISI, DFWatch–The government in Georgia has summed the Ukrainian ambassador to explain why ex-president Mikheil Saakashvili, who is wanted in his home country, has been appointed to a high position in Kiev.

Ambassador Vasyl Tsybenko was asked to come to the Foreign Ministry in Tbilisi some time the coming week.

Also the Georgian ambassador to Ukraine will be dispatched for a similar purpose, to meet with the Kiev government and hear their explanation as to why Saakashvili was appointed as head of the Advisory International Council of Reforms, despite being a wanted man for which Interpol has issued a Red Alert.

Saakashvili is wanted in four criminal cases: For having ordered the beating of a parliamentarian in 2005, for covering up the murder of a 28 year old man in 2006, for ordering the dispersal of an opposition rally and storming an independent TV studio in 2008, and for embezzlement of more than four million US dollars.