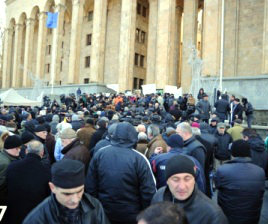 Priests organized several demonstrations against the bill, here outside parliament in Tbilisi. (Interpressnews.)

TBILISI, DFWatch–Lawmakers in Georgia on Thursday passed an anti-discrimination bill after being pressured from the European Union. The bill was slightly modified after criticism from the Orthodox Church.

The Georgian Orthodoc Church was opposed to the bill because it viewed it as a ‘legalization of homosexuality’.

Clerics asked to postpone the process. Parliament did not postpone, but changed some phrases in the bill.

The law in its final form bans discrimination on the basis of age, health, disability, sexual orientation and gender identity or profession. The draft prohibits discrimination in both public and private places.

The governing coalition in Georgia was determined to pass the bill before a pre-election break that starts April 15, as this was the last chance to pass it before signing an association agreement with the EU by the end of June, which is the government’s declared goal.

Recent events in Ukraine where the president’s refusal to sign a similar treaty, led to months of protest ending in a violent coup, have influenced debate in Georgia, and many are weary of Russian interference.

Some politicians believe that the Church’s opposition to the bill is a Russian ploy to derail the signing of the EU treaty. However, the head of the Church, Patriarch Ilia II, is the most trusted person in the country with over 97% approval rating in polls, and his opposition to the bill is likely to be representative of widely shared values among the Georgian population.

While debating the proposal, priests threatened Georgian Dream’s lawmakers to no longer mention them in their prayers, and one lawmaker threatened to stop going to church.

The governing Georgian Dream coalition decided to modify the draft bill by adding a new passage about ‘protection of the public moral.’

The new passage reads that in Georgia any type of discrimination is prohibited. The end of passage there is added: ‘protection of public moral, when the action has reasonable and objective justification.’

Shalva Tadumadze, government’s secretary of parliament explained during the session that the Administrative Code of Georgia mentions the same notion of public moral and parliament has not brought any new notions into the anti-discrimination law.

The law was finally passed at the third hearing on Friday with 104 votes against one and will come into force after President Margvelashvili has signed it.