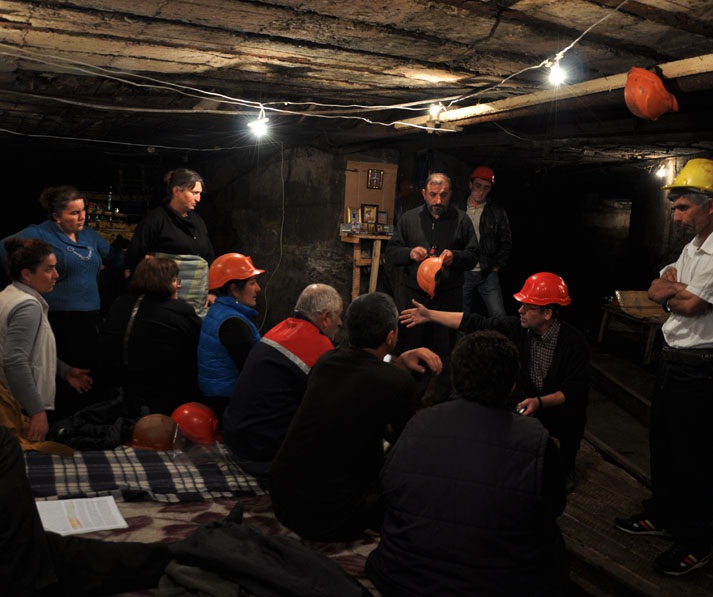 From the Chiatura miners’ strike in November 2012. (DF Watch.)

TBILISI, DFWatch–The strike among mine workers in western Georgia is continuing.

Workers in the coal mines in Chiatura demand better conditions and higher salaries, both of which they were promised over a year ago at the end of an extensive protest.

The workers have now been joined by shop owners, market vendors and ordinary people.

On Wednesday about 1 000 people showed up at a rally in the center of the town, Roland Abdushelishvili, one of the mine workers, told DF Watch.

He said the number of workers on strike is increasing day by day, and they do not plan to give up until their demands are met.

Abdushelishvili claims that Georgian Manganese, the company which owns the Chiatura mines, is trying to not communicate with journalists and keep the rally a secret.

Workers think the central television stations are busy reporting about events in Ukraine. They say they support and express solidarity with the people in Ukraine, but they think that if it is possible to make one hour reports about Ukraine it would be nice to report about a strike in Chiatura – at least in two minute reports.

The strike is continuing and the mine workers expect representatives of Georgian Manganese to meet with them.

Abdushelishvili says the company is due to pay workers an advance payment these days. They haven’t been paid yet, and that’s why more workers are joining the rally.