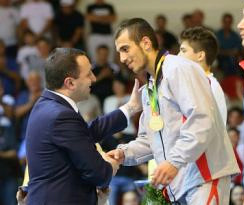 TBILISI, DFWatch–Georgia has won five medals so far in the European Youth Olympic Festival, which is being held in Tbilisi.

All medals, one gold and four bronze, were won in judo. Robinzon Beglasrishvili Wednesday won gold in men’s 60kg category, defeating his Italian opponent in the final round.

Prime Minister Irakli Garibashvili, who attended the competition, said after Beglarishvili’s gold that he hopes for further Georgian successes.

The champion suffered an eye injury and required hospital treatment a few hours after the match.

Natalia Kipshidze won bronze medal the same day in women’s 48kg category, defeating her British opponent. She is the first Georgian woman who wins a medal in these Olympics.

The junior Olympics are being held between July 26 to August 1, and include nine sports: gymnastics, athletics, basketball, cycling, handball, judo, swimming, tennis and volleyball.

Participants are living in a newly built “Olympic village” in Varketili near the lake Tbilisi Reservoir.