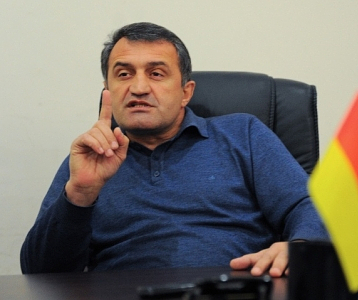 TBILISI, DFWatch–A diplomatic row is brewing between Georgia and Armenia after the speaker of Armenian parliament met with the de facto parliament speaker of South Ossetia.

Yesterday, Russian media reported that there had been a meeting between the speaker of the Armenian parliament and his counterpart in the de facto republic.

According to the reports, the Armenian parliament invited Anatoly Bibilov to Nagorno-Karabakh, a disputed enclave inside Azerbaijan supported by Armenia.

Galust Sahakyan met with Anatoly Bibilov on May 2 in Karabakh to discuss ‘bilateral cooperation.’

Abrahamyan explained that Bibilov came to Karabakh for the weekend on a private visit and that the meeting with Sahakyan was informal. The two didn’t discuss any political issues, like Georgia’s breakaway territories.

On Monday Armenia’s ambassador to Georgia was asked to come to the Ministry of Foreign Affairs, where he was met by Deputy Foreign Minister Gigi Gigiadze.

Gigiadze expressed concern that the Karabakh meeting contradicts the traditionally friendly spirits between Georgia and Armenia and harms bilateral relations.

The deputy minister told the ambassador that Georgia was surprised that the meeting between Bibilob and Sahakyan had been informal. He said that when representatives of the government of friendly neighboring country meet with the de facto government representatives of ‘occupied’ regions, any type of communication between them is absolutely unacceptable for Georgia.

Armenia’s ambassador expressed concern about what happened, adding that Yerevan will be notified about Georgia’s view immediately.

Even though Armenia is aligned with Russia, it has not recognized Abkhazia and South Ossetia as countries, despite attempts by Russia to make its partners do so.

Armenia is reliant on Georgia for its trade because of disputes with the other countries it has borders with, but internationally the country is aligned with Russia, while Georgia is allied with the United States.

Both countries have unresolved territorial disputes. For Georgia, it’s the two breakaway regions South Ossetia and Abkhazia, which Russia has recognized as countries, and for Armenia it’s the territory Nagorno-Karabakh, which is a de facto autonomous region inside Azerbaijan, controlled by an Armenian breakaway regime.