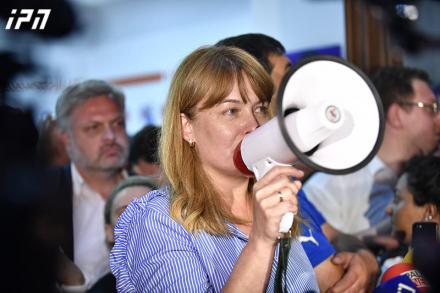 TBILISI, DFWatch–The ruling Georgian Dream party is leading in all of Sunday’s by-elections, including the symbolically important Zugdidi mayoral race.

But the vote was marred by numerous controversies, as the opposition claims the elections have been massively rigged.

Sandra Roelofs, the wife of Georgia’s ex-President Mikheil Saakashvili and a candidate for Zugdidi mayor, even says that the election fraud has reached such an extent that it’s virtually impossible for the opposition to win.

“This man will not go through elections,” Sandra Roelofs said with reference to Bidzina Ivanishvili, the billionaire founder of Georgian Dream, adding that it is impossible to hold fair elections in the country under the current circumstances.

“Today there were not actually elections. It was a special operation with the help of the SUS [State Security Service] and criminals and it should be stopped,” Sandra Roelofs said, after learning that preliminary results indicate she lost in the first round to Giorgi (Gega) Shengelia, the candidate backed by Georgian Dream.

Roelofs insists that she won the elections but the government stripped her of her victory by falsifying the results.

“It was an unprecedented sadism, terror and crime,” she said in her address to her supporters in Zugdidi.

The statement invoked the same feeling as during the 2003 Rose Revolution, but there are no indications yet that the United Opposition is about to start mass protests resembling those that unseated President Eduard Shevardnadze and eventually brought Saakashvili to power. In her speech, Roelofs added she would elaborate on her plans after having seen the final results from the Central Elections Commission.

Although there were elections in several towns throughout Georgia on Sunday, the lion’s share of attention by media and politicians has been focused on Zugdidi, a town in western Georgia about 350 km away from Tbilisi.

Both the government and the opposition threw most of their material and human resources into the Zugdidi race. Most instances of violence, brawls and standoffs  also occurred in Zugdidi.

The first official results indicate that Roelofs received about 42% falling short of qualifying for the runoff, while the Georgian Dream candidate got 54%.

Georgia held by-elections on Sunday amid intense confrontations and mutual accusations of pressure and fraud. There were mayoral elections in five towns, and in one Tbilisi district people elected a majoritarian MP to replace Salome Zurabishvili, who was elected president in 2018. Additionally, there were local elections in eight districts.

In each of these places, Georgian Dream’s candidates won in the first round. Only in Tbilisi’s central Mtatsminda electoral district did the opposition candidate manage to get through to the runoff. Here, lawyer Shalva Shavgulidze received 37% of votes while his opponent, professional medical doctor Lado Kakhadze got only 41%.