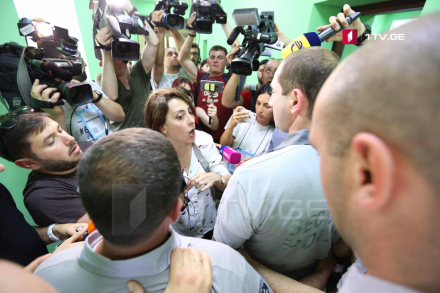 TBILISI, DFWatch–Tensions are running high in Georgia ahead of the May 19 by-election in Zugdidi, a town about 350km west of Tbilisi, with almost daily scuffles outside the office of the Local Election Commission.

Both the governing party and the opposition accuse each other of attempting to rig the election to replace the former mayor, who resigned due to corruption last year. At least one person has been arrested for assault.

The opposition UNM plans to amass thousands of supporters on Sunday. Their candidate, Sandra Roelofs, the wife of former president Mikheil Saakashvili, is running against a government-backed candidate.

Although the outcome will not have impact on the power balance in the country, these elections are considered a bellwether for what may happen in next year’s parliamentary election, and both the ruling Georgian Dream and the major opposition coalition, led by the UNM,  have thrown in almost all their material and human resources.

Many commentators also think the high interest in the Zugdidi elections is related to the symbolism of having the wife of the former president as one of the candidates. The ex-president has been prevented from canvassing in person because of criminal convictions  in Georgia, but addressed UNM supporters via video link.

Also other top guns of Georgian politics have visited Zugdidi and thrown their weight behind one of the candidates, including dozens of MPs from both major political blocs. A few weeks ago, even Georgian Dream founder and billionaire Bidzina Ivanishvili visited Megrelia and made lavish election promises.

GD’s former mayor, Lasha Gogia, and his deputy were arrested by State Security Service (SUS) last year for accepting a bribe from local businessman. This provided an opportunity for the opposition, which joined together in a coalition called ‘Strength is in Unity’; a collection of smaller opposition parties and the UNM, the former ruling party headed by Saakashvili – with his wife as its candidate.

The opposition claims the authorities, particularly the police and the SUS, are resorting to dirty tricks, including bribing and intimidation of voters. Spokespersons for UNM, many of whom have been in Zugdidi for weeks, have also voiced suspicions that the Local Election Commission is preparing to rig the vote.

The opposition also insists that authorities have enlisted local criminals to harass opposition activists. At least one person has been arrested for physically assaulting an opposition campaigner so far.

The authorities and the Central Elections Commission dismiss all allegations, claiming that the opposition is afraid of losing this symbolically important election and therefore staging provocations.

Both sides have mobilized their base in this race. What exact plans the pro-government campaigners have, is unknown; while the opposition says it will gather literally thousands of people on Sunday.

The UNM and its allies expect a crowd of 1,400 political activists, 1,000 volunteers and “up to 2,000 representatives of NGOs” in Zugdidi on May 19 in order to “prevent elections rigging”, said Grigol Vashadze, the leader of opposition coalition.