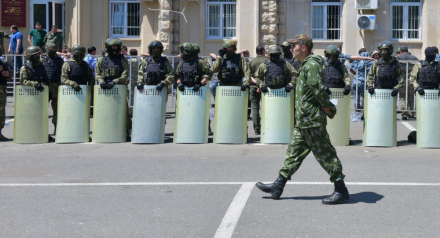 TBILISI, DFWatch–The opposition in Abkhazia rallied in front of the parliament building in Sokhumi Tuesday for the second day, vowing not to stop it until parliament postpones the presidential elections until fall due to the suspected poisoning of their leader.

Overnight, opposition activists temporarily blocked the central highway at two locations north and south of Sokhumi, thus effectively paralyzing traffic in breakaway republic. The blockage had been resolved Tuesday morning, but the opposition threatened to shut down traffic again if their demands are not met.

On Monday, the Sokhumi parliament voted against postponement and decided to hold presidential elections on July 21.

The decision sparked indignation among the opposition, as they blame authorities of poisoning their leader, Aslan Bzhania.

The opposition released a statement on May 16 claiming that an examination has revealed traces of mercury in Bzhania’s blood, which added fuel to the allegations of government involvement. On May 17, the de facto authorities  belatedly started a formal inquiry into the case.