Four people detained in Georgia for links to ISIS

Four people detained in Georgia for links to ISIS 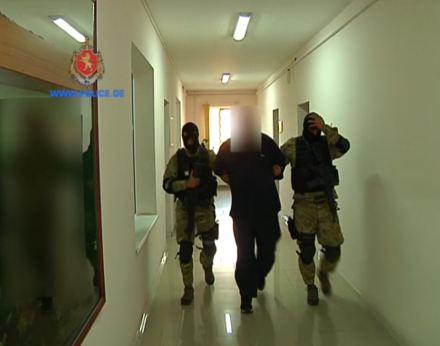 TBILISI, DFWatch–Four people were detained in Tbilisi and Kakheti, accused of joining the terrorist organization ISIS and recruiting Georgians to fight in Syria.

One of the detainees is a local from Pankisi Gorge, father of 9 Ayuf (Gaioz) Borchashvil.

The Ministry of Internal Affairs issued said in a statement that an operation was carried out in Pankisi Gorge on Sunday. The 36-year-old Imam of the village Jokolo, Ayuf  Borchashvili, was detained near Gombori. The others were apprehended in Tbilisi. Police only revealed the initials of their names and their age is from 18 to 24. Apart from being suspected of membership in and recruitment for the terrorist group, they are also suspected of assisting in terrorism activities.

Investigators claim Borchashvili is a representative of ISIS in Georgia. He recruited Georgian citizens to join ISIS and sent them to fight in Syria.

MIA further reports that he, with the help of others, used various religious literature, websites and groups in social networks to recruit youth, minors, including Muslim Kushtanashvili and Ramzan Baghakashvili.

April 2 the two youngsters left from Tbilisi airport for Istanbul, where they were greeted by allies of Borchashvili to help take them to Syria to join ISIS.

MIA also writes that the detainees influenced other Georgians who became followers of Wahhabiism, a radical form of Islam.

The three were detained when they were attempting to leave the country.

Among them was Giorgi, who had purchased air tickets to Turkey and was trying to leave for Syria with the help of Borchashvili. He was detained at the airport, with Giorgi and Davit. All of them planned to go to Turkey, and then on to Syria.

Law enforcement officers detained several people in Pankisi on Sunday along with Borchashvili, including relatives of Tarkhan Batirashvili, one of the field commanders of ISIS, who is known as Omar Al Shishani. His friends were also questioned.

However, all who were detained in Pankisi except Borchashvili were released. The latter will be formally charged on Tuesday.

His lawyer, Gela Nikolashvili says that his client is not yet officially charged but is accused of having a connection with the so-called Islamic State.

According to unofficial information, more than 30 people have left Georgia and gone to Syria in recent time. They have left for different reasons. There is no official data about the real number of Georgians who have gone to Syria.

Among them are several minors and young people, who went to Syria in secrecy and only later people found out where they had gone. Locals asked the government to help deal with this, and the government began monitoring and introduced tougher legislation.

According to the most recent data, at least 12 Georgians have died fighting in Syria.