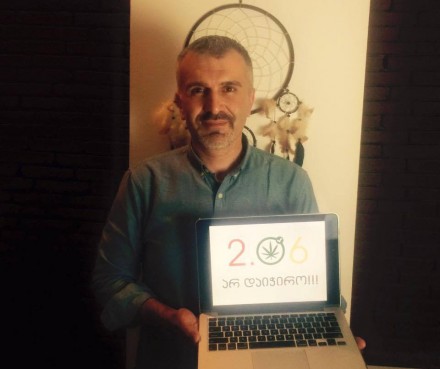 The third year in a row a large group of youth activists, supported by certain politicians, lawyers, journalists, musicians, actors and many famous personalities, lead a campaign demanding from the government to decriminalize personal usage or possessing of small amounts of marijuana and cannabis and separate it from drug crime. The draft bill does not concern large amounts of marijuana and drug dealing.

Activists carry out several rallies demanding to stop jailing people for personal use of marijuana and to stop the use of forced random drug tests.

For all this period government has been promising to work on liberalization of the drug crime related legislation but even the most recent government initiative was criticized for being poorly prepared just to fulfill requirement of the Association Agreement with EU.

Khachidze later offered further explanation of the bill on his Facebook page. According to the bill, considering small amount of marijuana, without dealing won’t entail a criminal law responsibility anymore. Among the drugs, apart of marijuana, there are also cannabis and cannabis resin.

Khachidze suggests punishment in amount of 100 laris (USD 43) for the first consideration and 300 laris (USD 130) for repeated crime.

Parliament bureau will consider the bill on Monday and will set the date of first hearing.