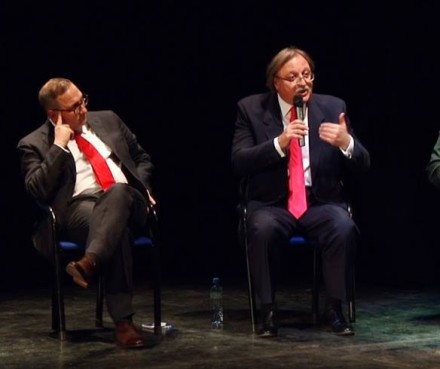 Tbilisi, DFWatch – The State Audit Office (SAO) auditors may set about scrutinizing finances of the recently established movement of Iveria, which consists of former prominent members of the past government, among them are former foreign affairs minister Grigol Vashadze, his former deputy Nika Vakashidze, ex-minister of culture Nika Rurua, and former ambassadors to France and China, Mamuka Kudava and Mamuka Gamkrelidze respectively.

Few months ago the organization, which had mostly been focused on think tank activities, declared their intention to participate in the upcoming parliamentary elections in 2016.

Therefore, Iveria relates the unexpected audit to its political activities, the allegation flatly denied by the SAO.

One of Iveria founders, Nikoloz (Nika) Vashakidze, said that Audit Office has a right to examine finances of his organization, yet the timing  is ‘very suspicious’.

“Yesterday we said we were preparing for the elections and the Audit Office comes up right on time. Let them check us, they have the right. The organization doesn’t have much financial activities,” Nika Vashakidze said to journalists.

Head of the Monitoring Service of the Financial Activities of political parties at the SAO, Zurab Aznaurashvili, said that monitoring service just requested organization statutes only.

Aznaurashvili also explained that according to the Georgian Law on Political Union of Citizens, every organization with the political goals undergoes through monitoring and other rules determined by the law.

“But there cannot be any audit so far, as we do not have yet financial information. First they have to provide financial information. There is the same approach towards every political party. It is strange for me what is happening today as we sent the letter (requesting statutes) about a week ago. We think it is about PR and related to their political goals,” Aznaurashvili added.