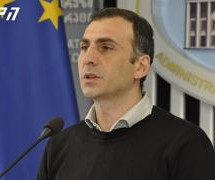 TBILISI, DFWatch–The the former head of the president’s pardon commission was questioned at the Prosecutor General’s Office on Monday.

Aleko Elisashvili claims he was pressured by authorities to give a favorable decision in the cases of specific prisoners, disregarding the standard criteria.

Before going in and being questioned for a second time, Elisashvili told journalists he had brought a phone with him to show ‘historical messages’ proving his recent statements.

In his previous comments, he said he aimed to publish the names of the politicians he was referring to if the investigation failed, but on Monday he said that so far, he is satisfied with the progress of the investigation.

He also told journalists that President Giorgi Margvelashvili offered Elisashvili a personal bodyguard. The administration confirmed this without explaining the reasons.

Earlier, the Georgian newspaper Kviris Palitra published an article based on an anonymous source describing one of the cases of alleged pressure on the pardon commission and Elisashvili, involving Vice Speaker of Parliament Manana Kobakhidze. Elisashvili didn’t comment on this case, beyond saying that he neither confirms nor denies it and will not comment until the investigation is completed.

Kobakhidze and one other person implicated in the case, head of parliament’s human rights committee Eka Beselia, were both questioned at the Prosecutor General’s Office on Monday.

“My patience, experience, endurance and professional skills will be enough to finish this case,” Beselia said. “People should see where the truth lies and then draw conclusions about what we are dealing with and what kind of political adventure this is, as the election campaign is beginning.”

Both Beselia and Kobakhidze said they have provided investigators with all the information and documentation they have about the case.

“I, as an MP, had an obligation to react to every application from prisoners about protection of their rights,” Kobakhidze said, referring to the case described by Kviris Palitra.

She thinks this is ‘a sordid campaign’ against her, and she plans to fight until all questions have been answered.