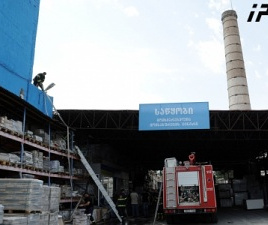 TBILISI, DFWatch–Eleven people were injured in a fire Thursday morning at a department store in Tbilisi.

The fire started at about 9am on the second floor of the store, where there was furniture.

Giorgi Bakhutashvili, communication manager of Hypermarket Gorgia, claims the fire was not big, but there was a horrible smoke.

Eleven persons were taken to hospital with severe intoxication. The injured are guards and service personnel.

According to the emergency service, about 50 square meters were burned. It is still unclear what caused the fire, but employees think it started in electrical wires.