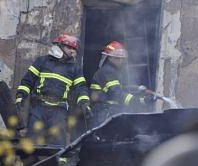 TBILISI, DFWatch–The government in Georgia is facing another challenge – fire safety in buildings – after three boys died in a hotel fire in Kobuleti, a town on the Black Sea coast, a few days ago.

Wednesday morning there was a fire at a café in Batumi. No-one was injured. But the same day there also was a fire in Kutaisi, the second largest city in Georgia, which resulted in the death of a man of about 30 years. The fire started in an apartment on Bukhaidze Street.

Early indications are that the fire probably was started by a lit candle, as this time there was no electricity in the house. The man died on the way to the hospital.

The Batumi fire started because of a gas leak. The entire kitchen was burnt out and the windows broke because of the explosion.

Meanwhile, the parents of three boys who died in Kobuleti are trying to determine what caused the tragedy, while members of the local government in Rustavi, the town where the boys came from, put the blame on the owner of the hotel.

The mayor of Rustavi, Davit Jikia, told Interpressnews that the owner of Hotel Armazi is attempting to blame everyone else and run away from the responsibility.

“It is quite obvious that every security norm was violated. It is even surprising that this hotel had visitors in summer,” he said.

The death of the three boys, aged 10 and 11, shocked Georgians and the funeral two days ago was attended by classmates, friends and relatives, who all came to the church to express their condolences to the families of the victims.

Attention now turns to how safety in buildings may be improved. Enforcement of building safety standards was significantly weakened during the Saakashvili presidency in 2009, when responsibility to conduct checks in schools and hotels was taken away from the Economy Ministry. Currently, the ministry is only responsible for facilities like dams and rope ways.

The government is looking at two areas of safety: first, to strengthen controls carried out by the Ministry of Economy, and second to train experts in building safety.

Another way to enforce standards is through local governments, which have power to approve or block construction projects.