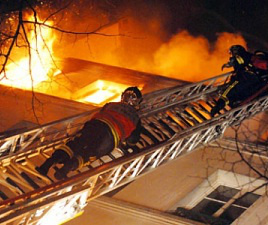 TBILISI, DFWatch–Georgia is shaken by the death of three boys in a hotel fire Sunday morning.

45 people were rescued from Hotel Armazi in Kobuleti, a town on the Black Sea. Among the hotel’s inhabitants were 31 minors. The three boys who died were were 10 and 11 years old.

They were from Rustavi, a town 20km south of the capital, and were on a trip to Kobuleti.

Some think the fire started in the room where the three boys were. The other children suspect that the air conditioner, which was switched on in the room, caught fire.

No-one is injured among those rescued from the building.

The bodies of the three who died were taken to Batumi.

Police are investigating it as a violation of article 187, passage 4, of the Criminal Code, about destroying an object which by negligence caused the death of two or more people.

The parents of the victims, who are in Kobuleti, accuse the teachers who traveled with the group of lack of attention.

The ensemble Sikharuli held a concert in Batumi last night and later went to Kobuleti. Today they were planning to return to Rustavi. The mayor of Rustavi and the head of the City Council arrived in Kobuleti. They promised parents to help returning kids from Kobuleti to Rustavi.

Interpressnews quotes the owner of Armazi Hotel, Shermadin Artmeladze, saying that leaders and teachers of the ensemble were partying and left the kids unattended, but he could not say what caused the fire. He said that they tried to open the door to the kids’ room after the fire started, but it was locked.

Artmeladze said the fire caused about 2 million laris worth of damage to the hotel.