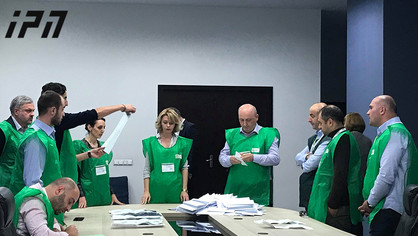 TBILISI, DFWatch–Exit poll after Georgia’s presidential election on Sunday show dramatically different results and all sides are bracing for a long and fierce standoff to ‘defend votes’.

The situation is tense in Tbilisi and the opposition is even talking about launching a wave of protest rallies if the government ‘rigs the results’.

Three companies have carried out exit polls and the results differs so much that it surpasses all limits of methodological error.

Two polls predict a runoff, but the third one indicates the election result is already decided by more than 50%.

Exit Polls authorized by Georgian Dream, and carried out by Georgian company Psycho Project (preliminary results), indicates victory in the first round for the candidate backed by the government: Salome Zurabishvili 52.3%; Grigol Vashadze 28.1%, Davit Bakradze 9.2%.

Davit Bakradze has already acknowledged his defeat and said that in the runoff his party will back Grigol Vashadze’s candidacy.