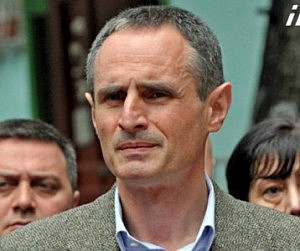 TBILISI, DFWatch–A former lawyer has been elected chairman of the embattled Free Democrats, perhaps the most staunchly pro-western party in the former Soviet republic of Georgia.

The Free Democrats’ failure to win any seats in the 2016 parliamentary elections coupled with the defection of several its key figures has all but led to its dissolution.

The task of rebuilding the party will fall to Shalva Shavgulidze (60), a former lawyer and member of parliament (2012-2016), was elected head of the party which has been most associated with Irakli Alasania, the former defense minister.

Shavgulidze was elected unanimously at a party convention held at Courtyard Marriott Hotel in Tbilisi on Sunday, after being proposed by Alasania himself.

Along with party chairman, Free Democrats elected an entirely new leadership, as the previous leaders either left the party or shelved their political careers.

Alasania, was a close ally of Bidzina Ivanishvili during the 2012 campaign which saw the new coalition Georgian Dream snatch government power from Mikheil Saakashvili and United National Movement.

However, after the arrest of five Ministry of Defense officials for alleged corruption in 2014, Alasania openly confronted the government, which led to him being dismissed by then PM Irakli Garibashvili. Soon thereafter, the Free Democrats withdrew from the Georgian Dream coalition, in which the part with the same name was the biggest partner.

Free Democrats appeared to be doing well ahead of the 2016 elections, but fell short of overcoming the 5 percent minimum needed to qualify for seats in parliament, which led to Alasania stepping down as party chair. He was followed by other key party figures. Some of them switched sides and embraced the ruling Georgian Dream party. Soon one of them, Victor Dolidze, was appointed minister for European and Euro-Atlantic integration.

Alasania told journalists on Sunday that he would stay as a ‘party rank-and-file member’ and planned to relocate to Washington, DC, and get involved in business, without offering other details.

“Shavgulidze is the man who will lead the party to the upcoming elections,” Alasania said. “I’m sure there will come a time when […] we change the electoral system and get back a multiparty parliamentary system in the country.”