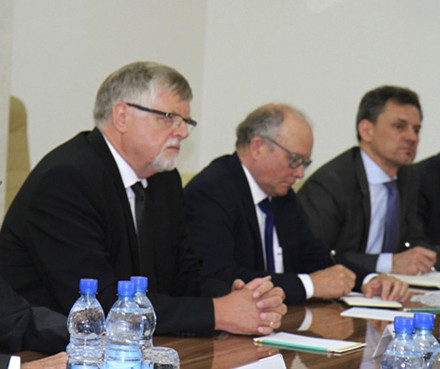 TBILISI, DFWatch–A European Union official congratulating the leader of a Russian-backed breakaway republic on winning the election has caused a diplomatic scandal in Tbilisi.

Herbert Salber, a German diplomat who is the EU’s special representative to South Caucasus and co-chairs the Geneva talks, was visiting the breakaway capital Tskhinvali on Monday when he congratulated South Ossetia’s de facto president Anatoly Bibilov on winning the ‘presidential elections’ held in April, 2017.

This was controversial because the EU does not recognize elections organized by South Ossetia, a Russia-backed separatist region of Georgia that declared independence in 1991 amidst the breakup of the Soviet Union, but failed to get international recognition.

“It’s not easy to find common points of consent between all the participants of the discussions, which everyone would agree with. However, we respect the stated positions and will do everything possible to ease the fate of the residents of the republic affected by the conflict; this is an important humanitarian component of our mission,” Herbert Salber was quoted by Sputnik-Ossetia as saying.

“We talk also about security issues. It concerns a specific legal document on non-use of force, which we hope will soon be adopted.”

These statements, especially the congratulation, caused an outcry in Tbilisi, where the Georgian Foreign Ministry summoned EU Ambassador Janos Herman to demand a clarification.

After meeting with Deputy Foreign Minister Davit Dondua, Herman explained that the EU has not changed its political stance regarding the conflicts in Georgia and does not recognize the de facto presidential elections held on April 21.

“What we have heard today from the EU Special Representative and the Geneva [negotiations] co-chairman, is to put it mildly unacceptable and incomprehensible,” Davit Dondua said. “It contradicts the principles of international law and does not support both Georgia and the international community for peaceful resolution of the conflict.”

Herbert Salber was designated as EU Special Representative for South Caucasus and Crisis in Georgia in July 2014. The German career diplomat has previously served in OSCE and NATO and is educated in French and Russian philology at the University of Bonn and Toulouse University.

It’s not the first time an EU representative is engulfed in controversy in Georgia. In 2014, there was outrage surrounding the appointment of former British army captain Ryan Grist as deputy head of the EU’s observer mission EUMM. Grist was accused of being a Russian spy because he said that Georgia launched military strikes first against South Ossetia in August 2008.

In 2012, the incident response meetings broke down in another separatist region. De facto Abkhazia authorities protested against the EU’s head of observers, Polish General Andrzej Tyszkiewicz, whom they saw as not neutral but partial for the Georgian side.