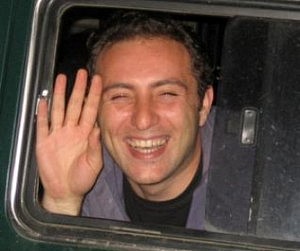 Sandro Girgvliani was 28 years old when he was murdered in January, 2006. 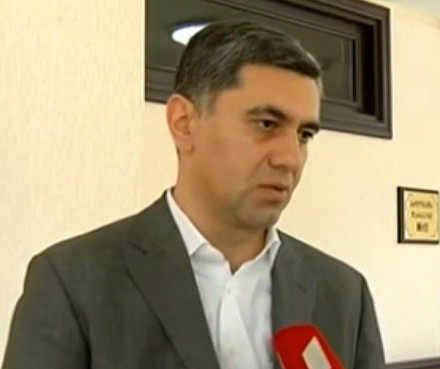 The witness on the stand Monday in Tbilisi City Court is no friend of the ex-president; Irakli Okruashvili is the former defense minister under Saakashvili whose falling out with his boss was part of the background for the 2007 popular unrest.

But the murder of Sandro Girgvliani, a 28-year old bank employee, took place in February 2006, while the witness heard in court was still a close ally of the president and part of his inner circle.

Okruashvili, who served as a prosecutor general, then minister of defense and minister of economy during Saakashvili presidency, told the court that the then president knew well how the young bank employee was murdered, but preferred to side with the culprits.

“[Saakashvvili] would say about Merabishvili and others that their punishment would cause the collapse of the [ruling] team and the country,” Okruashvili said on the witness stand with his back to the cameras.

Girgvliani’s murder in 2006, which triggered massive public outcry, was a hot topic of discussions between government members. Saakashvili first held a neutral stance but then decided to protect then Interior Minister Vano Merabishvili and Data Akhalaia, the head of the omnipotent Constitutional Security Department (KUDI), Okruashvili said.

Girgvliani, who was only 28, was abducted on January 28 in the center of Tbilisi and taken to a forest on the city’s outskirts, where he was tortured to death.

Prior to this he had an argument in a restaurant with a group of men and women that included Merabishvili’s wife, Data Akhalaia and Guram Donadze, the head of MIA’s PR department.

Under tremendous public pressure, several police officers involved in the murder were arrested. They were tried and put in jail. But no accusations were brought against neither Akhalaia and Donadze, nor Tako Salakaia, Merabishvili’s wife.

The policemen who were convicted served their prison time under privileged conditions and were given an early release.

Such privileged treatment could only have been ensured by Saakashvili, and he did it, Okruashvili said in court Monday.

The case loomed on Saakashvili’s presidency until its very end and was one of the key reasons of his failure in the parliamentary elections in 2012.

Georgia was strongly criticized by the European Court of Human Rights for the handling of the case. It said in a ruling that the different branches of state power had cooperated to prevent justice from being done.

Soon after the change of power, the new government started investigating the case. During Georgian Dream’s first year in power, Saakashvili was still president, and during this ‘cohabitation’ period, in a rare admission of error, he said in February, 2013 that the Girgvliani case was ‘a black stain’ on his conscience.

As the trial progressed, the key witness in the case, KUDI official, Oleg Melnikov, who was personally involved in the murder, pleaded guilty in August, 2014 and gave a full picture of the tragic events.

Then in November the same year, with Saakashvili nearly a year out of office, the ex-president was formally charged, and in June, 2015, the court allowed the prosecution’s evidence in the trial, which had to be conducted in absentia, with Saakashvili out of the country and serving in a new position as governor of Odessa in Ukraine.

In addition to Saakashvili, others have also been charged, including Vano Merabishvili, who was found guilty. Data Akhalaia fled Georgia and his current residency is unknown. Tamar (Tako) Salakaia was summoned to the Prosecutor’s Office for questioning in December, 2012 but was not charged.