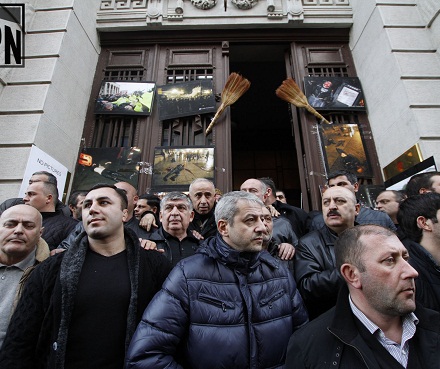 Protesters angry about the torture of prisoners blocking the entrance to the National Library before President Saakashvili’s state of the nation address. (Interpressnews.)

A violent clash developed as a column of activists for President Mikheil Saakashvili’s National Movement party, led by Tbilisi Mayor Gigi Ugulava, tried to break through a crowd of people angry about the mistreatment of prisoners, in order to get inside and listen to the president’s state of the nation address.

EU High Representative Catherine Ashton, and the European Commissioner for Enlargement and Neighbourhood Policy, Štefan Füle, in a statement Saturday called on all parties to act in a responsible way, and to refrain from any violence.

They called on all actors in Georgian politics to refrain from instrumentalising the processes or institutions of the state for partisan or for party political purposes.

The two officials see signs of a deterioration of the power-sharing arrangement between the Georgian Dream and United National Movement parties in Georgia, also in the ongoing stand-off around a set of planned constitutional amendments.

“The EU considers it of paramount importance for the future of Georgia’s democracy that all political actors and institutions in Georgia be accorded due respect, in line with our shared European values,” the statement says.

Saakashvili in his delayed TV speech Friday evening blamed the police for not offering his fellow party members safety, and portrayed what happened as an example of how his party is being persecuted by the government. But Interior Minister Irakli Gharibashvili said the National Movement party activists had been offered safe passage by the police, but rejected the offer and instead walked into the crowd.

Speaker of Parliament Davit Usupashvili Friday said the incidents was a performance organized by the president.