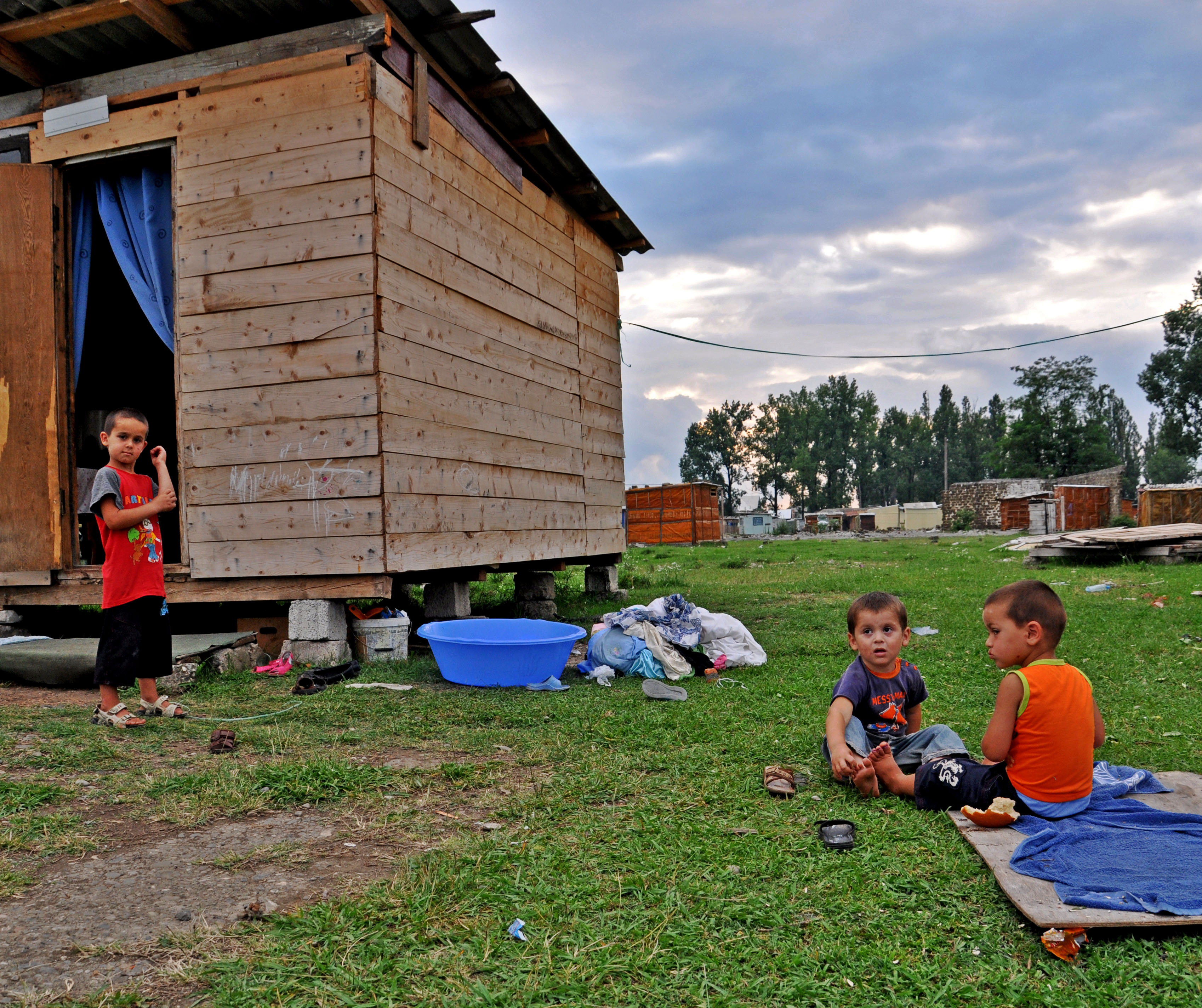 TBILISI, DFWatch–About 800 single-room barracks are constructed at the former base of the 53rd regiment in Batumi, a beach resort on the Black Sea and one of Georgia’s most popular tourist destinations.

The barracks were constructed by families of eco-migrants who have been living there since October, 2012, after there had been held demonstrations to highlight the problem and while expectations were high after the Georgian Dream’s victory in the parliamentary election.

The place is called ‘Dream Town’. There is no electricity or gas, and water is only available in the yard for two hours a day. Residents admit that they settled on state property illegally, but they think the government is responsible for giving them a place to live, as it promised to do years ago.

“Our hopes are on [Prime Minister Bidzina] Ivanishvili. We were standing 24 hours in the streets hoping for a better future, and now that the government has changed, we hope they will help us,” Donara Vashakmadze says, adding that government representatives have been here several times and tried to forced them to leave, but together they manage to remain in their barracks.

Many of them used to live in rented apartments in nearby towns, but could no longer afford to pay the rent. Even though they do not have electricity and gas, many of them say they prefer staying here, where they have to pay for nothing and wait until someone will pay attention to them.

“It’s hard in winter, though. Some had wood heaters, but it was hard to get woods. When it’s raining, it rains inside our houses just like outside, and in summer we fear that snakes or something else may sneak into our houses,” Vashakmadze says.

Vepkhia Beridze explains that people found building materials for their shacks in villages.

“And also this was an election period. Here in the woods we cut some trees and no-one fined us.” 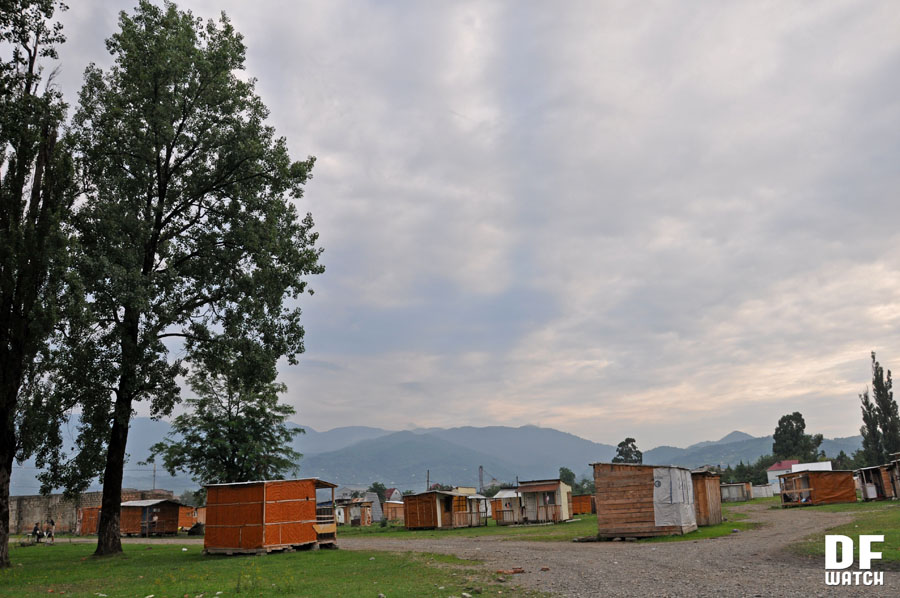 Most of the barracks are built of wood and cardboard. Some live in old wagon or buses. In Dream Town there are several newborns, disabled and elderly people, who find it hard to live under such conditions.

Eteri Shavadze and her daughter Nanuli have lived in Dream Town for eight months with four children. One of them has chickenpox and they do not have money to take her to the doctor or buy medicine.

Nanuli, a mother of four, says she wasn’t able to work as she has to take care of children, while her husband had two operations and cannot work either. She used to live in a rented house in Batumi for 250 GEL (USD 150), but she left the house and moved here, where her sister constructed a barrack for her. Her sister has a job and is renting a house in town.

Nanuli’s house in Khulo was damaged in a landslide. 12 people were living in that house. She had to leave with her husband to find a living. Her husband used to be in the military, but was wounded and lost his job and salary of USD 600 with no pension.

“We have forgotten what a TV is and things like that here in the darkness. I think I deserve a house for my children, who are going crazy in this place,” Nanuli says.

Just like most of the families in Dream Town, Nanuli doesn’t receive social allowance from the government any more as they have changed their address. There is no address in Dream Town; however, residents have written numbers on the shacks in order to know who lives where. 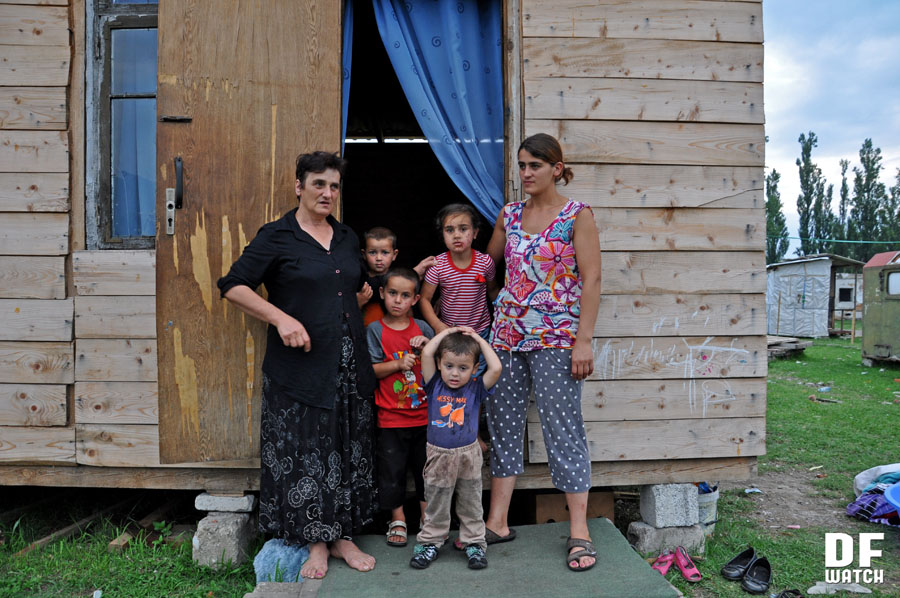 For more than three months, tens of eco-migrants have been rallying in the center of Batumi. No-one pays attention to them.

Those people were given shelter in the town Tsalka, in southern Georgia, but the problem is that the houses do not belong to them, even though they were forced to pay part of their costs. The previous owners, the majority of whom are Greeks, returned to their houses and demand USD 400 in rent. They couldn’t pay the fee and came back to Adjara to request help from the government.

They want shelter until the government solves their problem in Tsalka, where they want to have houses and a land to be self-sufficient with their own harvest. The protest has lasted for months. 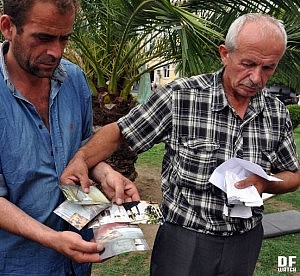 Alexandre Iremadze shows photos of his old house, which was damaged by the landslide (DFWatch Photo)

Alexandre Iremadze’s house was destroyed in 2005 and he has documentation that he deserved a shelter from government. He was sent to Tsalka with a family of eleven.

In addition he says that it is hard to live in Talka without owning land.

Part of the protesters started seeking shelter in Batumi and discovered an abandoned children’s shelter which was closed after a trafficking scandal and has been closed for more than one year. 144 eco-migrants have been living in this place for more than two weeks. There is little space, so they sleep on the ground in the hall or outside on the grass.

“The local government agreed with us to look for a temporary shelter together. They couldn’t find a place. We found this building and came here to live.”

Only the entrance to the building is rehabilitated. The rest of the floors are completely destroyed, but there are still guards on the first floor and they do not let residents go and live upstairs.

Archil Khabadze, Head of Adjara’s Autonomous government explains to journalists that the government does not shirk its responsibilities and is working to solve the eco-migrants’ problems, but he says that many in Dream Town at least have an alternative place to live, but came here in order to illegally demand apartments from the government.

He said there were 3 000 families in Dream Town at first, but now 800 of them have left and many will leave. He thinks the families who really need help, will stay. The government asked those families to write applications describing their problems. 1 200 statements were submitted, but Khabadze says 90 percent of them at least have houses, but want to get some benefits from the government. 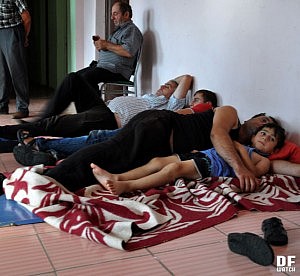 “There are maximum 50 families who really need assistance from the government and we will help them,” Khabadze said, adding that they also plan to help with everyday problems in Dream Town, which means helping with roofs and fences.

But in the end, the people here will have to leave what is the property of the government and belongs to a military base.

Davit Baladze, Finance and Economy Minister of Adjara’s Autonomous Republic, said at a meeting with journalists of media-tour organized by the Civil Development Agency (CiDA),that while studying situation of eco-migrants Adjarian authorities discovered that many had houses, but there were families who were really affected by landslide.

“One million lari was additionally allocated to help them and to start new building for eco-migrants in Khulo. We have announced a tender, but it is hard to solve this problem at once,” he said.

A government commission was set up to study the eco-migrants’ problems in Adjara. A report, describes 12 different places in Adjara where people were resettled after being affected by the storm or landslide, also for social problems and poverty – 1 864 families in total.