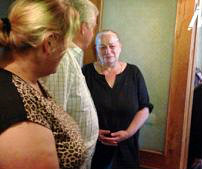 Zhuzhuna Beridze said she believes her 16-year old daughter was murdered in a robbery. (Interpressnews.)

TBILISI, DFWatch–A 16-year old girl was found dead Monday evening near the new boulevard in Batumi, a beach resort and one of the main tourist destinations in Georgia.

Lia Mgeladze, a friend of the victim’s family, said Mariam Kochalidze was found near the beach with her throat slashed and a large stone on her back. Family and relatives had been out searching for her, as she did not answer her phone.

At 7 pm she was discovered on the beach, according to the victim’s mother, Zhuzhuna Beridze. At the crime scene, the victim’s laptop and bag was found, but her bicycle and Iphone 5 was missing. Beridze said she believes her 16-year old daughter had been murdered as part of a robbery.

Spokesperson Nino Giorgobiani in the Ministry of Internal Affairs said later Monday that an ‘intensive’ murder investigation was underway to find the identity of the killer and arrest him.

“He will be strictly punished in accordance with the law,” she said.

Rustavi 2 TV interviewed two witnesses who believed the murderer was a homeless man who had been living in the area and was known to locals. One of the witnesses said she had seen the man riding on the victim’s bike, and when she asked him where he got the bike, the man answered he rented it in Batumi.

The Ministry of Internal Affairs later published a description of the suspect, a man aged 40-45, who had been seen entering a taxi near the crime scene between 7 and 7:30 pm.

President Mikheil Saakashvili wrote on his Facebook page that he was shocked by the murder. He then went on to explain the tragedy as a result of the Ivanishvili government’s failed crime policies. He wrote that in Kutaisi and Batumi, Georgia’s second and third cities, there have in recent times been much noisy ‘street negotiations’ and that criminals have been enjoying more freedom.

“This, of course, worsens the overall security situation,” the president wrote, and called for ‘urgent measures’ so that children are not under threat.

“I, as a father, do not want to see our country become a place where children are afraid to go out,” Saakashvili wrote.

Earlier this year, the governing coalition enforced a mass amnesty which released more than half of all prisoners. The president vetoed the bill twice. His party, the National Movement, claims the policy has led to an increase in crime, but the Interior Ministry presented statistics which it claimed showed that crime has not increased in 2013.

Justice Minister Thea Tsulukiani in an interview on Maestro TV sent her condolences to the family of the murder victim.

“I want to tell society that no matter when a murder happens, it is always painful for us. The investigation should find out who the perpetrator is, and this person should be punished strictly,” she said.