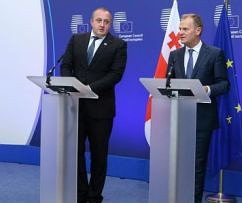 TBILISI, DFWatch–President of the European Council Donald Tusk on Monday sided with Georgia in a conflict over the installation of border signs with South Ossetia, calling the signs a provocation.

The signs are placed along the old ‘administrative border’ with the region, a reference to how the borders were during the Soviet Union.

Tusk on Monday met with President Giorgi Margvelashvili, who had invited him to Georgia, and appeared at a press conference with him at the presidential palace.

Addressing the issue of border signs, Tusk said it’s a provocation and cannot contribute to stabilize the situation.

Locals have been cut off from accessing their farm land in the area, and the border signs are placed close to an oil pipeline owned by BP.

The council president’s visit will last two days and also include meetings with the prime minister, opposition parties and the speaker of parliament.

At the press conference with the president, he expressed support on behalf of the EU for Georgia’s sovereignty and territorial integrity within its internationally recognized borders. He said Abkhazia and South Ossetia are parts of Georgia and they do not recognize the treaties which Russia signed with these two regions, as the don’t have any legal basis. The EU calls on Russia to live up to its obligations, Tusk said.

He could not specify when Georgian citizens, including those living in the breakaway areas, will be able to travel to Europe without a visa, but said there are ‘ambitious plans’ and that he personally wishes to see the process accelerated.

He plans to visit villages near the administrative border on Tuesday familiarize himself with the situation on the ground.